IHBC’s ‘Heritage from the doorstep’: Shock and dismay as historic monument vandalised with ‘stay at home’ message 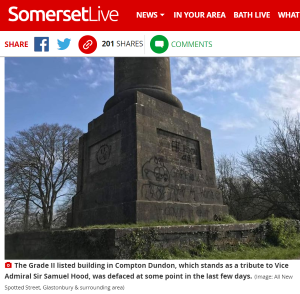 Shock and dismay have been expressed after an historic Somerset monument was vandalised with a “stay at home” message, writes Somerset Live.

The Grade II listed Hood Monument in Compton Dundon, which stands as a tribute to Vice Admiral Sir Samuel Hood, was defaced at some point over the past few days.

An image of the cartoon cat Garfield has been sprayed painted onto the base of the monument with the message “Garfield says stay at home”.

Other faces and incomprehensible graffiti have also been daubed on to the monument.

Historic England, which cares for historic structures and sites across the country, has been left saddened by the attack.

Mark Harrison, Historic England’s head of heritage crime strategy, said: “We will be working closely with Avon and Somerset Police to identify the offenders and bring them to account.”

The Hood monument at Compton Dundon is among the most significant listed structures in England.

The column was built around 1830 to commemorate the life of Admiral Sir Samuel Hood, who led a number of Royal Navy campaigns during the latter part of the 18th Century….

Simon Hickman, South West development advice team leader for Historic England, said: “It was built around 1830 to commemorate the life of Admiral Sir Samuel Hood, who led a number of Royal Navy campaigns during the latter part of the 18th century.

“We are saddened to hear the monument has been vandalised…. this doesn’t just harm to the historic fabric but can also affect local character and civic pride.

“Although we are currently unable to make a site visit due to the ongoing COVID-19 outbreak, Historic England will provide advice and expertise to assist with any technical queries to make good ….”