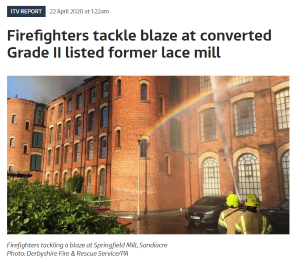 Firefighters have tackled a blaze at an historic Grade 11 li8sted former lace mill at Sandiacre, near Nottingham.

The fire broke out at Springfield Mill in Bridge Street, Sandiacre, on Tuesday afternoon and crews worked into the night to extinguish flames which continue to burn in the roof.

Derbyshire Fire and Rescue Service said “rapid and effective firefighting” had saved three quarters of the mill – which is now apartments – and “significant numbers of appliances” remained overnight.

Springfield Mill, with its distinctive chimney, is a well known local landmark…..

The fire service was called at 4.23pm and eight engines, two aerial ladder platforms, two water carriers and a control room unit went to the scene but residents said flames were still visible at about 7pm.

“The flames were pouring out the top, but I could see the firemen were already trying to tackle it.”

Mr Walters said it was a shame to see the “gorgeous old building” in this state and Ms Talbot described Springfield Mill as “iconic”.

Daniel Fenwick, 31, added: “The building is a beautiful piece of Nottingham heritage. It’s sad to see this happening to such a prominent building with so much history.

“I just hope everybody got out safely and have somewhere safe to go.”

The Historic England website says the lace factory and attached chimney were built in 1888 for Terah Hooley, a wealthy local industrialist, and had capacity for 160 machines.

At that time, Nottingham was the international centre of machine-made lace.