IHBC’s ‘Heritage from the (COVID-19) doorstep’: Thieves take advantage of lockdown to steal lead from All Saints church roof in Halsham 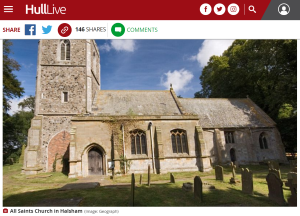 The Hull Daily Mail reports that police have appealed for witnesses after thieves stole lead from the roof of All Saints Church in Halsham near Hedon during the coronavirus lockdown.

Police have been appealing for witnesses to come forward who may have seen anything suspicious near the All Saints church, off North Road in Halsham, around the time of the theft, which happened between Sunday, April 5, and Sunday, April 12.

Officers said they were called by the church warden after light was seen shining through the church’s roof.

It was later found that a number of lead strips had been removed.

PCSO Darren Bainton, from the Rural and Wildlife Crime Unit, said: “We were contacted by the church warden at around 3pm on Sunday 12 April following the discovery of light shining through the roof into the church, on inspection of the roof it was found that a number of lead strips had been removed.

“The theft of lead from the roofs of rural churches is a problem we have had across Yorkshire and the local community police teams have been in the forefront of efforts to combat it, including working with the Church of England Diocese of York and community groups like Neighbourhood Watch.

“I would urge local residents, when out taking their daily exercise, to take a look around their local church yards and report any suspicious activity to us on our non-emergency 101. If you see a crime in progress call 999.”

On the Historic England website, Dr Louise Grove, senior lecturer in criminology and social policy at Loughborough University discussed the impact of rural crime on the communities it affects.

“When metal is removed from the roof, it reduces the usability of the place of worship – and sometimes prevents it being safely used for months at a time.”

Anyone who may have information about the theft from the church in Halsham is asked to call police on their non-emergency 101 number, quoting reference number 16/44103/20.