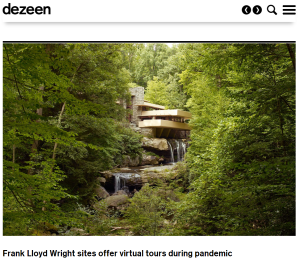 One might, it seems, be almost anywhere in the U.S. and only a few hours drive from a Frank Lloyd Wright house. The “Wisconsin-born Wright’s portfolio,” writes Jess Hoffert at Midwest Living, consists “of about 500 structures, a good portion of which still stand in the Midwest.” Wright houses span the West Coast and nestle in the suburbs of Washington, DC. As millions of visitors see up close every year at the Metropolitan Museum of Art’s Frank Lloyd Wright Room, Wright’s style permeated every part of his designs, inside and out.

But there’s no talk of travel these days. The Wright-designed homes and museum exhibitions that were open to the public have closed their doors to visitors “just when they were gearing up for the spring touring season to begin,” announced the Frank Lloyd Wright Building Conservancy. To make sure the public still has access to twelve of those famous works, the Conservancy—along with the Frank Lloyd Wright Foundation and the Unity Temple Restoration Foundation—have launched #WrightVirtualVisits, which offers virtual tours of 12 iconic houses.

The delivery method is “a touch confusing,” Matt Hickman comments at The Architect’s Newspaper. Tours kick off at 12:00 Central every Thursday “for six weeks (and maybe more). Each week, the conservators of a specific Wright site will share a short yet intimate video tour on its website and associated media pages of another Wright site…. Each week, two fresh Wright properties will partake in this virtual tour swap.” This does require a close reading of the instructions, and requires one to keep a date, as it were, for a Wright tour.

Given the houses on display, you might not find this too troublesome.

Buildings that have been featured already or are up to bat in the coming weeks include the Unity Temple in Oak Park, Illinois; the Hollyhock House, recently named as the first UNESCO World Heritage Site in Los Angeles; Chicago’s Prairie School stunner, the Emil Bach House; Taliesin West, home of the (possibly) defunct School of Architecture at Taliesin, in Scottsdale, Arizona; the stunning yet often-overlooked Graycliff estate outside of Buffalo, New York; Samara, a pristine Usonian design in West Lafayette, Indiana; the Gordon House, the only Wright building in Oregon, and, of course, Fallingwater.

That last house must surely be Wright’s most famous, an exemplar of his “Usonian” style. But no matter what particular idiom he chose, the Midwestern aesthetic values that shaped his early Prairie Style carried through into all of his later work. In her short guide to ten of the most well-known Prairie Houses, Wright expert Carla Lind describes his visual philosophy as representative of “ideals in which midwesterners believed.”

The seeds of the Prairie Style were rooted in an appreciation for nature and a dedication to the freedom and individuality inherent in democracy. To that Wright added his own experiences and influences: his mother’s teaching via the Froebel gifts, that natural law could be understood through geometric abstractions; his father’s passion for music, which introduced him to composition and harmony; the literature of the day that informed him about the Aesthetic and Arts and Crafts movements and transcendental writers such as Whitman, Emerson, and Thoreau… the Japanese art and architecture at the World’s Columbian Exposition….

The price of admission—free for as long as it lasts—makes this opportunity to see, from a safe social distance, how Wright balanced these influences well worth the virtual trip.

Read the article in Dezeen