IHBC’s ‘Conservation from the doorstep’: ‘Heritage group’ (HE) stumps up £224k for Wentworth Woodhouse 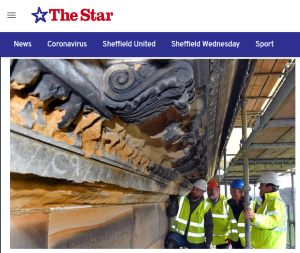 Historic England has stepped in to help stately home Wentworth Woodhouse when it faced an unexpected £370,000 repair bill, writes The Star.

The Grade I-listed mansion, owned since 2017 by a charitable trust, is undergoing a massive restoration – one of the largest current heritage projects in the UK.

More than £7.2 million of crucial repairs to its badly leaking roof are now nearing completion.

However, after work started, heritage specialists discovered intricate Georgian cornices, 18 metres above the ground, were crumbling away.

Historic England has stepped in with a grant of £224,000 to replace more than 90m of the ornate sandstone and limestone cornice, which runs around the roofline of the mansion’s Palladian East Front.

Large sections of stone are coming loose, smaller ones have already fallen off and water is seeping in, causing further damage and posing a risk to people below.

Sarah McLeod, Wentworth Woodhouse Preservation Trust chief executive officer, said: “We were dismayed to discover the cornice was in a much worse state than anticipated.

“Although small in comparison to the vast swathes of roof we have made safe, it was a big hurdle because we had no money for it.

“We needed to act before the £1.1m scaffold facilitating the mansion’s roof work begins to be taken down from May onwards.

“Waiting months to secure grants would have meant re-erecting the scaffold and doubling the budget.”

One of its volunteers, former company secretary Jonathan Robinson, wrote his first ever bid for the Trust and secured £10,000 from the Freshgate Trust Foundation, a grant-making charity established in 1941 by Sheffield’s Harry Brearley, discoverer of stainless steel.

The Liz and Terry Bramall Foundation, set up after the sale of Keepmoat, donated £70,000.