NT: Lost statues of the Nine Muses recreated at Stowe after nearly 100 years 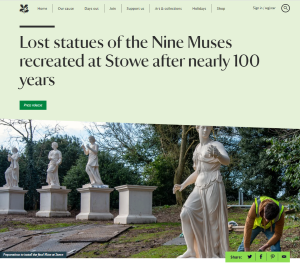 After years of historical and archaeological detective work, nine lost statues of the ‘Muses’ – goddesses of the creative arts and poetry – have been recreated at the National Trust’s world-famous gardens at Stowe in Buckinghamshire.

The landscape garden at Stowe is one of the most remarkable legacies of Georgian England. Created by aristocrat and politician Viscount Cobham in the grounds of his family home from 1717, the garden was created to symbolise Viscount Cobham’s power and political and social beliefs. It pioneered the latest fashion in gardening and became one of the country’s first tourist attractions.

For around 100 years the 18th-century lead Muse statues attributed to van Nost the Elder were an important element of the Georgian landscape gardens. But many were sold off to pay crippling family debts in the 19th- and early 20th-centuries, with some believed to have been melted down or bought for other statuary collections.

Now, using three statues – one of the original Muses, along with two statues from a wider surviving group – the National Trust has painstakingly re-created the figures in composite stone and returned them to their last-known position in the heart of the garden. The work is part of an ambitious five-year programme, involving experts from across many disciplines, to reinstate many of the lost temples and monuments that once dressed the gardens like pieces of a theatre set.

Curator Gillian Mason says: “Stowe is a garden full of classical iconography and meaning, where the temples and statues reference classical myths, legends, historical characters and events. At its peak, over 100 sculptural elements played a key part in telling these multi-layered stories.

“I believe the nine Muses, along with a statue of Apollo, were the most significant statue group at Stowe. Reintroducing these lost elements will bring meaning, significance and coherence back into this remarkable landscape.”

Archival research and archaeological investigations show that, like many other statues at Stowe, Apollo and the Muses were moved around the garden, but their final location was around the Doric Arch within the ‘Elysian Fields’. This part of the garden was a lesson in morality and virtue, designed to honour those who the family held in high esteem – among them, the Ancient Greeks.

To recreate the Muses, experts from Cliveden Conservation Workshop took a mould from Calliope (the Muse of heroic poetry), the only original Muse statue still at Stowe, which now tops the garden’s Grenville column. A further two moulds were made of Painting and Sculpture, which were part of a wider group of statues that once stood on the Parterre at Stowe but are now at Anglesey Abbey in Cambridgeshire.

Sculptors then used these as base moulds, paring back and maniputing each statue’s arms, head, hair, body orientation and drapery to achieve individual positions and features. Guided by Trust research into classical and 18th-century statues, archives and drawings, they also crafted ‘attributes’ (symbolic items such as globes and tambourines) to denote each Muse’s identity.

Archaeological investigations and historic garden plans were then used to arrange the statues as they were, at the edge of a circular glade on either side of the Doric Arch.

Phase two will be to find a suitable statue to copy in order to restore a lyric Apollo – an Apollo holding a lyre – to the group. As the God and patron of poetry, music and the arts, Apollo lived on Mount Parnassus accompanied by his nine Muses.

Gillian continues: “This significant statue group will not be complete until we locate a suitable lyric Apollo and restore the full group around the Doric Arch to the entrance of Elysian Fields.

“The historic sale of statues eroded the richness of the garden, but by restoring or recreating elements such as Apollo and the Nine Muses, we are bringing these lost narratives back to life.”