IHBC’s ‘Heritage from the doorstep’: Restoration plan for historic Lowestoft town hall site, thanks to HE report 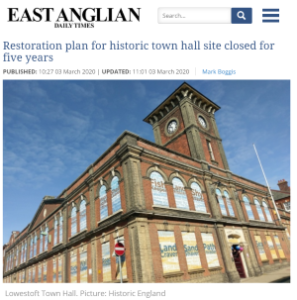 A creative hub has been proposed as part of a scheme to revitalise a historic town hall site that has been empty for almost five years, as options for the future development of Lowestoft Town Hall are being explored following a Historic England-commissioned report, applauds the East Anglian Daily Times.

Options for the future development of Lowestoft Town Hall are being explored following a Historic England-commissioned report. And with the Grade II listed town hall building to be repaired and restored as part of the Lowestoft Heritage Action Zone, it will enable it to be brought back into public use. With the 19th century building – owned by Lowestoft Town Council – having been vacant and unoccupied since spring 2015, the report recommends the creation of a centre for activities… and artisans.

The 163-year-old building previously served as the headquarters for the former Waveney District Council until staff vacated the site in 2015 as part of a £13m accommodation programme that led to the creation of the authority’s Riverside building on Canning Road. The landmark building was transferred over to Lowestoft Town Council in 2017.

The next steps for development will be discussed at a public event on Friday, March 13 as representatives from Historic England, North Lowestoft Heritage Action Zone, East Suffolk Council and Lowestoft Town Council unveil proposals…

A Historic England spokesman said: “The recommended option for the town hall will provide vital facilities for local people and, as a creative hub, will attract a large number of visitors to the area generating footfall to stimulate investment in other local properties.

“It is suggested that the land behind the town hall could be used for landscaped car parking space to support access….”

The next stage of the scheme is to seek funding from the Architectural Heritage Fund for detailed project development work.

The meeting to discuss the town hall’s development takes place on Friday, March 13 from 3pm to 5pm and 6pm to 8pm at the council chamber, Hamilton House, Lowestoft…

Standing prominently on the historic Lowestoft High Street, the town hall opened in 1857 and was designed by Suffolk architect JL Clemence.

But its history of housing local governance goes back to 1570, when a town house and chapel were first established, and the original facility remained until a new town house was built in 1698.

Mayor of Lowestoft, Alice Taylor, said: “Lowestoft Town Council is thrilled to pass this stage of our journey to redevelop the Town Hall, which is such an important part of the revitalisation of Lowestoft.

“The conclusions of this in-depth study by Colliers International independently reinforces what many people of Lowestoft want and gives us a great guide as we move on to the next step.

“The Town Hall is the civic centre of Lowestoft and holds a special place in many hearts. It’s great to have this road map to a revitalised Town Hall….”

Craig Rivett, East Suffolk Council’s deputy leader and cabinet member for Economic Development, said: “The town hall is an important part of the historic High Street and we are looking forward to working with partners to help give the building a new purpose which will benefit local people and visitors…”