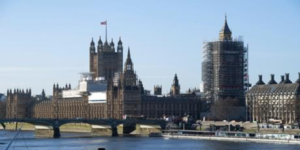 The Palace of Westminster was due to undergo a multi-billion-pound face-lift, with the £4 billion restoration seeing MPs and lords moved to temporary home, but The Daily Mail reports form the Times that the project could be reduced to less than a £200 million budget over a year.

image: Parliamentary copyright images are reproduced with the permission of Parliament

The Palace of Westminster was due to undergo an extensive multi-billion-pound face-lift that would have seen MPs and lords temporarily move to a new building.

Members of Parliament were due to shift their offices to Richmond House, the former Whitehall home of the Department of Health, and the Lords to the nearby Queen Elizabeth II Centre by the mid-2020s.

The whole project scheduled for completion early in the following decade.

But that project is now under threat with Commons authorities considering a smaller one-year programme of renovations.

Elizabeth Tower which houses Big Ben at the Houses of Parliament which currently undergoing restoration. A further proposed £4 billion restoration of the Palace of Westminster could be scaled back

An alternative budget of less than £200 million has been drawn up for the revised small-scale work to be carried out on the Commons, according to the Times.

During this time MPs would reportedly relocate to the House of Lords while peers will be at the Queen Elizabeth II Centre.

The inside of Richmond House, which was due to be demolished to make way for a temporary chamber and offices for MPs, would be cancelled under these new proposals.

Theresa May’s government backed the ambitious renovation project, that was approved by MPs in a Commons vote in 2018.

MPs and peers passed motions to give the green light to the restoration work amid growing concerns over the safety of the Palace.