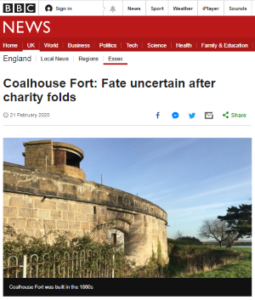 The fate of Coalhouse Fort in East Tilbury, Essex is uncertain after the charity which restored and managed it, the Coalhouse Fort Project, has disbanded due to dwindling volunteer numbers and difficulty keeping up with paperwork.

But the charity has disbanded due to dwindling volunteer numbers and difficulty keeping up with paperwork.

Thurrock Council, which leases the building, said it was exploring options for the “important heritage site”.

There have been defences on the site since the time of Henry VIII when an artillery blockhouse was built in the aftermath of the Reformation.

In a statement on its website Coalhouse Fort Project management committee said Thurrock Council had taken a ‘broader interest’ in the fort in recent years.

It said: “The decision was not made lightly or without consideration for the fort, but rather we feel this marks the beginning of its next chapter.

“When the project began in the 1980s the fort was physically falling apart, having been derelict for most of the 30 years following the dissolution of Coastal Defence in 1956.

“But with energy, enthusiasm and hard work of countless volunteers across the years, thousands of members of the public have had the chance to explore the historical treasure.”

The site is a Scheduled Ancient Monument and on the Historic England At Risk Register and the paperwork required due to this to carry out works had become prohibitive with fewer volunteers.

A Thurrock Council spokesman said: “We recognise the time, effort and commitment that this group has dedicated to the site’s preservation and restoration – for this, the council offers its thanks.”

Will Fletcher, inspector of historic buildings at Historic England, said the fort was an “exceptional building” and it was important a future use “told the story of the site”.