Industry archive broken up and at risk 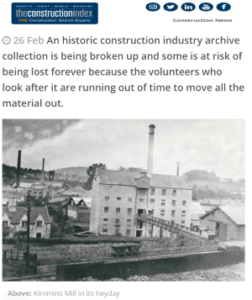 An historic construction industry archive collection – the  Construction Industry Resource Centre Archive (CIRCA) – is being broken up and some is at risk of being lost forever because the volunteers who look after it are running out of time to move all the material out.

The Construction Industry Resource Centre Archive (CIRCA) has been housed since 1999 in Kimmins Mill in Dudbridge, Stroud. The old flour mill, a listed building in need of repair, stands in what its today the car park of a Sainsbury’s supermarket.

At the end of 2017 CIRCA was given notice to quit after Sainsbury conducted an evaluation of assets. Up until then, Sainsbury had charged just a peppercorn rent.

The problem, says CIRCA archivist John Keenan, is that the mill holds so much material that the small band of volunteers has had insufficient access and insufficient time to move all the material out. There are still three miles of documents and plan chests inside the mill, as well as the old Brick Development Association brick ‘library’ collection and George Wimpey’s huge old boardroom table, among other artefacts, says curator John Keenan.

For its part, Sainsbury says that it has given CIRCA plenty of time, issuing a notice in December 2017 to be out by 23rd June 2018. When this deadline was missed, a further three-month extension was later granted to January 2019. All the while, the volunteers were moving out what they could. As the dilapidated building is now considered a safety hazard, with rotting floors that are overloaded, further ad hoc access has had to be supervised by Sainsbury’s property team and its structural engineers, to ensure safety.

Last month Sainsbury gave the Circa Trust an extra fortnight to remove material, Mr Keenan says, during which time the half-dozen volunteers managed to shift a further 20 tonnes of material, now stored in basements of various sympathetic local businesses.

“We just need more time from Sainsburys,” says John Keenan, who is feeling the pressure. “We need another month or two.”

Various homes have been lined up for some parts of the collection and beneath the archive material is about £10,000-worth of shelving for which a local school has put its hand up for.

The archive came together only in the 1990s when the corporate world moved towards a paperless existence. Most companies no longer wanted to keep their old trade literature, catalogues and brochures. Professional libraries were moving online.

John Keenan had been commissioned by the British Standards Institution (he was the Chartered Institute of Building’s representative on the codes committee) to investigate the documents used by construction professionals. This was a prelude to the production of the BSI Construction Standards Manual. During his research, alongside BSI historian Bob McWilliam, John Keenan found 8,800 relevant documents. These documents represented the start of the National Archive for Construction.

Early deposits in 1996 included the library of the newly privatised Property Services Agency and the Wimpey Grove Projects Library at Hammersmith after George Wimpey quit construction after swapping assets with Tarmac. While access is now restrictred, the Stroud News & Journal sent a photographer inside in November 2018. These photos are available online and show some of the curiousities and treasures, including the contents of the Wimpey trophy cabinet.

Thanks to support from Taylor Wimpey, the Wimpey archive is now destined for the London Metropolitan Archives (LMA), run by the Corporation of the City of London.

Other organisations, including the National Archives in Kew and the University of Warwick’s Modern Records Centre, have expressed interest in some of the other material.

But without more time to make further arrangements, and to physically carry the thousands of boxes and files out of Kimmins Mill, the future of much of the historic material remains uncertain.

John Keenan says he would like to see the construction industry bring whatever power and influence it has to bear down on Sainsbury, by writing to the chairman, Martin Scicluna at J Sainsbury plc, 33 Holborn, London EC1N 2HT.

More volunteers in the Stroud area would also be appreciated. John Keenan can be contacted via keenan123@btinternet.com.