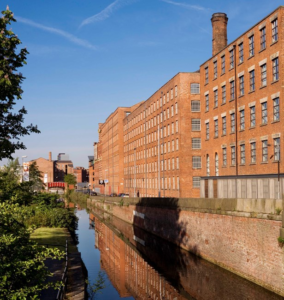 To meet the government’s target of being carbon neutral by 2050, we must recycle, reuse and responsibly adapt our existing historic buildings, according to this year’s Heritage Counts report, so Historic England and partners are calling for a reduction in VAT rates to incentivise this more sustainable option.

Image: Paragon Mill in Manchester has been restored and converted into apartments © Historic England

This early research shows that sympathetically upgrading and reusing existing buildings, rather than demolishing and building new, could dramatically improve a building’s energy efficiency and would make substantial energy savings because the CO? emissions already embodied within existing buildings would not be lost through demolition.

Heritage Counts is published by Historic England on behalf of the Historic Environment Forum.

What is embodied carbon?

Currently we are taking steps to reduce the daily emissions created by heating and powering our buildings, but the carbon savings which could be made from reusing, rather than demolishing, existing buildings are being overlooked.

Existing buildings already embody significant CO? emissions in their materials. Further data is needed that looks at the whole lifetime of our existing buildings, but the early research in this report shows that by not counting embodied carbon, we underestimate the entire carbon emissions of a new build by up to 31%.

Compared to refurbishing a traditional Victorian terrace, a new building of the same size produces up to thirteen times more embodied carbon. This equates to around 16.4 tonnes of CO?, which is the equivalent of the emissions released by driving 60,000km, or 300 times round the M25, in a large petrol car.

Demolishing buildings also not only produces millions of tonnes of waste (one third of all the waste produced in the UK every year comes from construction and demolition), but building new has high energy costs, guzzles resources and accounts for 26% of the world’s plastic consumption.

“Recycling plastic bottles is a normal part of our daily lives, but reusing our existing historic buildings would be a much more powerful way to improve our environmental impact. Despite this, reusable buildings are demolished every year and new buildings, which require a huge amount of carbon to build, replace them. Investigations need to continue, but the results from this year’s Heritage Counts report show that reusing and responsibly upgrading historic buildings is good for the environment and essential to meet our ambitious carbon targets.”

End fast fashion for buildings: repair rather than rebuild

Recent figures show there are over 200,000 empty homes in England, whilst thousands of historic buildings are neglected or not used to their full potential. Underused textile mills in West Yorkshire, for example, could be transformed into more than 11,000 new homes.

However, the current VAT rates, at 20% for refurbishment and 0% for new build, financially incentivise developers to completely demolish existing buildings and build new. These VAT rules also make it difficult and more expensive for home owners to sympathetically adapt their older buildings to make them more efficient.

Historic England and the Historic Environment forum are calling for VAT rates for refurbishment to be reduced to incentivise the much more sustainable option of refurbishing existing buildings.

We cannot meet our 2050 carbon targets without improving the energy efficiency of our existing buildings, of which 20% are historic, built before 1919. The early research in this report demonstrates that by thoughtfully adapting an old building in the right way CO? emissions could be reduced by more than 60%.

For a single traditional terraced house, this equates to 92.8 tonnes of CO? emissions, which is the equivalent of the emissions created by watching 2 million hours of TV in the UK.

If we responsibly refurbished 50% of all pre-1919 residential buildings between 2021 and 2031, carbon emissions would be reduced by 39.6 million tonnes (tCO2e) by 2050, which is equivalent to more than 3 million flights from Heathrow to Dublin.

“This research is game-changing. It shows how living in the past can help us to step into a carbon-friendly future. Most of our housing stock is historic to some degree: relatively few of us live in recently constructed homes. Upgrading and renovating existing buildings means we can control the carbon expended through new construction activity, while ensuring a future for the heritage all around us. Since the vast majority of our built heritage is cared for by private owners, a reduction in the VAT rate would help to incentivise best practice in repair and maintenance.”

“We are pleased to include the launch of this important and timely report in our Heritage Day agenda. Every year historic buildings are demolished to make way for new buildings; it is crucial that owners and developers are encouraged to recycle, maintain and repair our existing housing stock to cut carbon emissions and help us reach our net-zero target by 2050. To help achieve this aim, the Heritage Alliance has long been advocating a change to the perverse disparity between VAT treatment on repair and maintenance versus new build. We look forward to working with the sector and policy makers to consider the implications of this year’s Heritage Counts.”