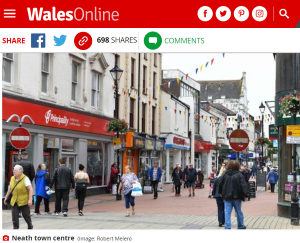 Neath is a market town like many others in Wales. Standard in its layout, a town centre with everything within walking distance. Historically bustling. But like its similarities, its problems also mirror those seen in towns across Wales, blighted by dwindling footfall, a rise in begging, lost high street names and rising anti-social behaviour.

The fact that according to Neath Port Talbot Council the town centre’s vacancy rate is below the Welsh average tells a story about the wider picture in Wales.

Numbers suggest this is a typical town. This is what a typical Welsh town now looks like.

Wander around the town centre and it is impossible not to notice the amount of empty shops.

At the beginning of the year there were 26 vacant units in the town – including Next, which left a big gap in New Street when it closed last November.

The once dominating Post Office in Windsor Road is also gone.

In just a few months the image of the town seems to have deteriorated even further. More places have shut or are covered in scaffolding.

Boarded up and covered with big ‘Keep out’ signs, the Canterbury Arms…. sits empty in a prominent position in the town centre.

“It is rotten here,” a resident standing outside says.

“Years ago, Neath was lovely – now it is like a ghost town.

“There are lots less shops.”

The resident said she was ashamed of her hometown, the 63-year-old adding: “I have lived in Neath all my life and it isn’t a good advertisement.

“They have to try to get more traders in.

Apart from empty shops, the town faces other challenges, anti-social behaviour and begging.

Lasting up to 48 hours, the notices ban an individual from a specified area and are issued for reasons such as intoxication to substance misuse, anti-social behaviour or begging.

Neath Port Talbot Council is also trying to get to grips with the issues facing the town and, after the number of homeless people in Neath Port Talbot almost tripled over the past year – due to a combination of factors – set up a new scheme asking people to donate to homeless charities via collection boxes.

However, WalesOnline has revealed that the diverted giving scheme raised less than it cost to set up.

This happened as drugs were being highlighted as a significant problem across the borough, which has one of Britain’s highest heroin death rates…..

Alison Davies, from Briton Ferry, is a resident ….

“There are lots less people coming into town now and going to Swansea or Cardiff.

“I cannot get any menswear or shoes.

“I work in Neath but I would rather not come here.

“It used to be a nice place, with lots of different shops.”