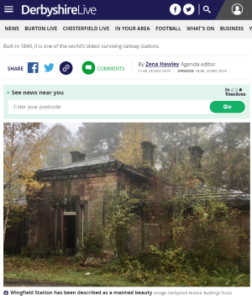 The Derbyshire Telegraph has reported on how the historic Derbyshire Grade II* (GII*) listed Wingfield Station, built in 1840 and one of the world’s oldest surviving railway stations, is to be rescued.

One of the UK’s most at risk buildings is about to be rescued and restored thanks to a grant from the National Lottery Heritage Fund.

Grade II*-listed Wingfield Station was built in 1840 and is one of the earliest stations in the world.

It is also the last surviving example of railway architect, Francis Thompson’s best work on the North Midland Railway.

Francis Thompson was commissioned by Robert Stephenson – son of George Stephenson – to design 24 stations along the Derby to Leeds section of the North Midland Line.

Wingfield Station is the only one to survive.

In 2012, the Victorian Society described the station as a “maimed beauty deserving better” and one of the ten most important buildings at risk in the country.

The Derbyshire Historic Buildings Trust (DHBT) has been awarded a round one grant of £137,000 to start the restoration project, which will save the building for future commercial and community use.

Detailed proposals are then considered by the National Lottery Heritage Fund at second round, where a final decision is made on the full funding award of £592,600.

Amber Valley Borough Council compulsorily purchased the station after more than 30 years concern over its deteriorating condition and now the DHBT will take ownership from the council on December 10.

During the restoration of the nationally significant buildings, DHBT is planning to offer a host of activities such as living history events detailing the story of the station and the North Midland Railway line, bursary placements for young people’s training in traditional skills and open days for the public and local community.

The trust will also be recruiting volunteers to help with the project as well as collecting memories and experiences of those who used to work, or had families who worked at the station or on the local railway.