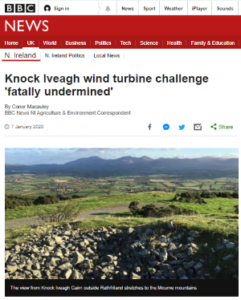 A government department responsible for heritage sites did not go to court over a controversial planning decision at an ancient monument because its grounds for an injunction had been ‘fatally undermined’ by previous decisions.

The revelation came in papers revealed under freedom of information law.

It centres on an approval for a wind turbine – which is now operational – near Rathfriland in County Down.

The site at Knock Iveagh is regionally significant, dating back 5,000 years.

The application was passed when planners failed to consult fellow civil servants who were archaeology experts.

Those experts later said they would have recommended rejection of the application because of its effect on the setting of the Neolithic mound.

The hill at Knock Iveagh is believed to have been used as a burial place and later as an inauguration site for early medieval Irish kings.

It has emerged that the department responsible for heritage in Northern Ireland considered going to court when the controversy broke in 2017.

But it decided against it when it discovered that its experts had been consulted about a second turbine in the same area at about the same time and had not objected.

An internal briefing document, released to the campaign group Save Knock Iveagh under freedom of information legislation, states that a “more robust planning response” should have been provided in respect of the second turbine, which was later refused on other grounds.

The first turbine was approved in 2013 and the second went through the planning system the following year but it was 2017 when the approved one was about to be built that the story came to public prominence.

Other documents released to Save Knock Iveagh show that the body that advises government on protected monuments was adamant the turbine should be taken down.

The Historic Monuments Council told the department that applying international guidelines the turbine was adjudged to have a “large/very large adverse impact” on the historic setting, having become the dominant landscape feature on the Knock Iveagh skyline.

The turbine was approved under a former planning system when it was the responsibility of the Department of the Environment.

After the reform of local government in Northern Ireland the planning function was passed to councils.

Armagh City, Banbridge Craigavon Borough Council has been considering whether to revoke planning approval for the turbine since 2017.

It is believed one issue delaying a decision is that the council might be liable for compensation costs to the turbine owner of up to £750,000 ….