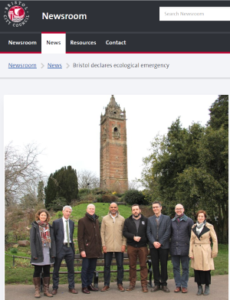 Bristol is the first major city to declare an ecological emergency as it calls for an urgent response to declines in wildlife and ecosystems.

Bristol has declared an Ecological Emergency in response to escalating threats to wildlife and ecosystems.

There has been a worrying decline in numbers and diversity of wildlife in the city and more widely in recent years, with 15% of British wildlife now at risk of extinction.

The declaration was jointly made by Marvin Rees, Mayor of Bristol and Ian Barrett, CEO of Avon and Wildlife Trust, at a city council Cabinet meeting on Tuesday (4 Feb 2020). It is currently supported by six city partners.

It builds on the declaration of a climate emergency in 2018 and recognises these two threats to our wellbeing.

The Mayor has asked that the One City Environment and Sustainability Board work with the council and other city partners on a plan setting out the actions that the council and partners will take to support and add to the existing initiatives which are already taking place.

Priorities will include looking at ways to stop wildlife habitats from being destroyed, managing land in a sustainable way that is sympathetic to wildlife and creating and caring for wildlife-rich spaces in every part of the city and across the region.

It is hoped that by declaring an ecological emergency, it will kick-start a response from the whole city. Action is needed at all levels, from central Government, through to local partnerships and communities and individuals.

The One City Plan already includes an ambition to double wildlife in Bristol, which demonstrates the ambition of the city to stop the decline in wildlife and start to restore what has been lost.

Marvin Rees, Mayor of Bristol, said, “It is not too late to start the recovery of our wildlife. We must work together to grasp this last chance and put things right for nature and wildlife in our city.

“This declaration will provide a focus for the whole city to come together and take positive action.

“Our commitment to this will extend beyond parks and green spaces. We need our buildings, streets and open spaces to support wildlife and create a more nature friendly city, and we need new developments to do the same.

“This is about how we responsibly build and develop the city so humans don’t threaten wildlife and instead support them to grow alongside us. We can’t solve this issue over-night but if we make sure we consider the ecology when we build each new development, and take major city decisions, then we can start to make major progress.

“In developing this action plan we will work with our colleagues across the West of England and with Government to seek to secure the policies, funding and powers we need to restore nature nationally and locally.”….