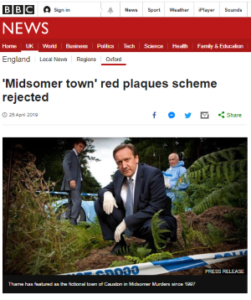 Proposals by an Oxfordshire town council to erect plaques on a range of listed buildings which had featured in the TV show ‘Midsomer Murders’ would not relate to an important or well-known historic figure, an inspector decided, and rejected the proposals.

A proposal to put plaques on buildings in Thame to promote its role in ITV’s Midsomer Murders has been refused.

The district council said it would ‘compromise the historic and architectural interest of the buildings’.

Thame has featured as the fictional town of Causton since 1997.

Filming has taken place in Thame, Wallingford, Dorchester-on-Thames, Warborough, Henley and Watlington and walking tours have sought to capitalise on the programme’s popularity.

South Oxford District Council said: ‘Whilst the visitor may wish to ‘arrive in Midsomer’, it is important to also recognise that Midsomer is not real and that the market town of Thame is historically significant in its own right and not as the set of a television programme.’

The Oxfordshire Blue Plaques scheme said it could not support the project.