Kent’s Ramsgate, designated a Heritage Action Zone (HAZ) by Historic England and the focus of the IHBC’s South East (SE) Branch’s day conference and AGM on 13 March – a Brighton 2020 ‘pre-School’ event – also is the focus of a forthcoming book from Historic England, previewed here by Kent Life.

Ramsgate is a classic Thanet seaside town that is also right in the vanguard of our national heritage.

And it’s not just down to the patronage of royalty in the early 19th century, which made it a fashionable place to stay, and led in 1821 to its designation as a ‘royal’ harbour – the only harbour to be so named in Great Britain.

Ramsgate was a key trade and fishing port and from the mid-18th century it became increasingly popular as a sea bathing resort. Nearby is Pegwell Bay, traditionally held to be the landing place of the Saxons in 449AD and of Augustine of Canterbury in 597.

Ramsgate served as a port of military embarkation during the Napoleonic wars and in 1940 it was from Ramsgate that the famous ‘little ships’ sailed to relieve Dunkirk.

In 2017 the town was designated a Heritage Action Zone (HAZ) by Historic England, a partnership initiative which aims to encourage economic growth by using the town’s historic environment as a catalyst. Despite struggling with the issues that have beset most seaside towns since the 1970s, the town boasts a diverse and characterful streetscape, including many distinctive historic buildings.

Geraint Franklin, an architectural investigator for Historic England, has been preparing a new book on Ramsgate (due for publication in March) as part of the five-year HAZ project.

Welsh born, he says he approached the town with the fresh eyes of an outsider and that ‘in walking down the high street to the harbour for the first time, the reason for doing this project was so immediately apparent, because while the boarded-up shop fronts told one story, the richness and distinctiveness of the historic environment immediately leapt out at you.’

Geraint says he has been struck by the enthusiasm of local residents. ‘Alongside documentary research, I explored the town on foot, studying the buildings and spaces. A lot of residents stopped me and asked me what I was doing. It’s clear that the people of Ramsgate are passionate about their heritage.

‘I was taking a group of people around on a Heritage Open Day tour and someone stopped me and told me he was doing his own research into Vale Square, an early Victorian development of villas around a leafy square. This gentleman was so knowledgeable about his subject that we agreed to exchange notes.

‘One couple I met are collectors of Ramsgate memorabilia and they made their collection available to me. The entire HAZ project is very much about engaging with the community, working with local residents and sharing our findings and stories.’

He describes the harbour as Ramsgate’s ‘most precious single resource, the reason for the town’s existence from the start,’ and says he was intrigued by the contrast between the gritty harbour and the genteel resort.

‘I think that’s the key to Ramsgate’s seaside character,’ he argues. ‘It’s changed over time, of course, with the addition of the marina and the modern port, but it’s important to recognise that the ongoing fishing, shipping and shipbuilding traditions, along with the lifeboat service, continue to contribute to the working character of the place.’

Along with buildings like the Clock House and lighthouse, he points out that the harbour itself is a listed structure. Work started on the harbour in 1750, but it soon became clear that it was rapidly silting up.

In 1774 John Smeaton, a distinguished civil engineer who designed many bridges and canals across Britain, proposed creating an artificial backwater in which water collected in an inner basin was released at low tide to scour away the silt.

Ramsgate is bookended by two religious communities, both initiated by visionary individuals who fell in love with the town and decided to settle there. Augustus Welby Northmore Pugin funded and designed St Augustine’s Church on the west cliff, erecting The Grange, a house for his family, alongside it.

Over on the east cliff, Sir Moses Montefiore founded a synagogue and a theological college next to his own estate. But Geraint says that we should not forget Ramsgate’s ‘commissioners’ church’, St George’s, on Broad Street, with its formidable lantern tower.

Built in the 1820s, he says: ‘It’s a reminder of the town’s golden age. This was a period when the infrastructure of the town was laid down and some of its finest terraces and squares were put up.

‘Ramsgate has some of the finest Regency street architecture in England,’ continues Geraint. ‘Wellington Crescent, Royal Crescent and Liverpool Lawn, with their verandas and bay windows, are highly characterful and rival those of Brighton.’

They also reflect Ramsgate’s changing fortunes, he adds. A lot of them fell into disrepair and were subdivided after the Second World War, but this is changing again with many new people restoring what are now listed buildings.

Talking of listing, the HAZ has already led to several new listings in the last year, including a fountain built for the 1951 Festival of Britain and a rustic kiosk, originally an admission kiosk to the gardens of the Granville Hotel, which subsequently saw duty as a newspaper kiosk.

Ramsgate, the town and its seaside heritage, by Geraint Franklin, will be published by Liverpool University Press on 31 March, 2020, (£14.99 paperback, also available as an ebook). It’s packed with vivid new photographs by Historic England’s Chris Redgrave, along with many previously unseen archival images and paintings.

For more background to 2020 School sponsorship see the NewsBlog 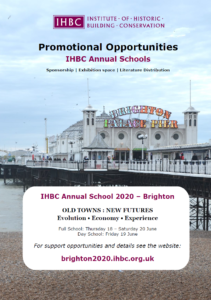 For any questions and to discuss options and opportunities contact Fiona at projects@ihbc.org.uk