IHBC’s ‘Heritage from the doorstep’: Decision to be made on £3m restoration of Crystal Palace Park Subway 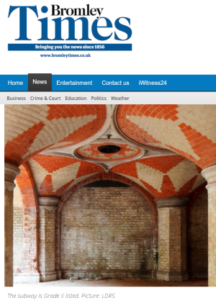 The latest bid to revitalise the historic Crystal Palace Subway is set to be decided, notes The Bromley Times, with councillors to consider tipping millions of pounds into the project.

Members of Bromley Council’s executive will vote on Wednesday, February 12 whether to put £3.141m towards the scheme to refresh and regenerate the site at Crystal Palace Park.

The 154-year-old subway is home to Victorian arched brickwork and eye-catching walkways.

However, the Grade II listed structure is currently defined as ‘at risk’ by Historic England, with a report to be presented to councillors highlighting the park’s decline over the last century.

“From its original conception the park struggled with mounting costs, and just at the point where its fortunes were turning the Crystal Palace burnt down,’ the report reads.

“The destruction of the palace was closely followed by the Second World War, and its historic landscape was severely damaged as a consequence.”

The council aims to address the slide by pumping £3m into the ambitious facelift, with the costs expected to be met by grants from the Mayor of London’s Strategic Investment Pot, Historic England, and Transport for London, and a contribution from the Friends of Crystal Palace Subway.

Of the funding, £2.34m will come from the council’s successful application to the Mayor of London’s office, with the remainder expected to come from the other sources.

The council has proposed a two-stage process for the project, with the authority already starting part one, which included going out to tender for an architect team to review the building and create a plan for the restoration works.

Once that work is completed, the council expects to go out to tender for the actual works contract.

The authority hopes the restoration will help create “a new cultural destination”.

It also hopes the move will attract a commercial partner to help operate extra visitor facilities at the site.

The plans are set to be analysed the night before the executive’s decision at a special meeting of the council’s renewal, recreation and housing development scrutiny committee.

If approved, the plans will head to full council for approval.