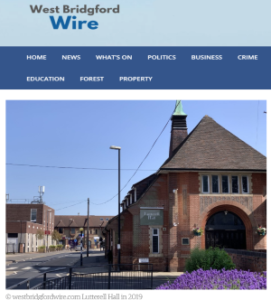 Since then a ‘Friends’ group was set up by residents to lobby for the hall to remain as it is, promotions were run by the council to attract more users to the facility, and a petition was launched to ‘save’ the hall too.

An application was made to Historic England to have building listed – see below the decision which was published today 21 January 2020.

“The Council fully accepts the listing by Historic England and respects the affection held for this heritage asset.

“In marketing the site it has remained clear the Hall has to be preserved. The listing of the Hall will be taken into account when Cabinet reviews options for the future of the building later this year.”

Here is a brief excerpt from the report:

The parish hall in West Bridgford, built in 1929 to the designs of Alfred John Thraves, is a particularly good example of this building type in terms of its design quality and distinctive composition.

It has a dominant, half-hipped roof with sprocketed eaves which, together with the striking arched entrance of three orders, creates an overall form of impressive proportions.

Whilst the craftsmanship of the hall does not place it in the first rank of Arts and Crafts buildings – such as the houses by Baillie Scott, some of which are listed at the highest grades – the vernacular revival details, for example the tumbling in at the gable verges; the low, sweeping roof conveying a sense of shelter and homeliness; and the careful attention to detailing and materials, are all in the spirit of the Arts and Crafts ethos.

The close attention paid to the use of materials and their effect is one of the most successful elements in the building’s design, particularly notable in the entrance front in which the combination of red brick, tile creasing and metalwork creates a finely executed pattern of textural richness.

The interior of the main hall is simple but its architectural treatment distinguishes it from the more standard form and decoration typical of most parish or village halls. It relies for effect on the graceful curve of the barrel-vaulted ceiling divided into bays by parallel bands of plasterwork in a foliate design. The building has been subject to some modifications but overall it remains close to its original state with the plan form, plasterwork, principal doors, floorboards and schoolroom fireplace all intact. The replacement of the windows with uPVC is unfortunate but it does not detract unduly from the special architectural interest of the building.

Alfred John Thraves does not currently have any buildings on the List but this example of his work clearly demonstrates the hand of an accomplished architect who deserves to be recognised as nationally important through listing. In addition to its architectural quality, Lutterell Hall also has a historic and visual relationship with the Grade II listed Church of St Giles which accords it strong group value. It fully meets the criteria for listing and should be added to the List at Grade II….

After examining the available records and other relevant information and having carefully considered the architectural and historic interest of this case, the criteria for listing are fulfilled. Lutterell Hall is therefore recommended for listing at Grade II….