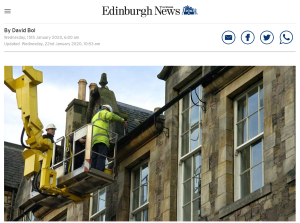 The Edinburgh News has reported on an app that is being drawn up by developers on behalf of the city council to create a ‘virtual tenement’, to help bring the city’s stock of crumbing tenements up to standard.

A tech company is developing a new app to set up a ‘virtual tenement’ in order to help shared building repairs be carried out across the Capital – amid council bosses helping £5m of essential work to be completed since 2017. Edinburgh City Council is hoping to move plans forward for the tenement app – that will see decisions on repairs taken by all owners in a shared stair be legally binding. The Scottish Government ‘CivTech challenge’ initiative led to company, Novoville, taking forward designing the app for the city council.

Louis Daillencourt, business development director at Novoville, said: ‘It will allow users, effectively, to find each other, to create a digital version of a tenement and to organise themselves and to collaborate – to produce reports on the issues they are facing, to send those out to a surveyor or trader to get a quote…’

Mr Daillencourt said it was likely that the full app would incur a cost in order to keep the service maintained. He added: ‘We are studying there being a cost for people because this adds a huge amount of value and we will have to keep the lights on and make sure that we improve the app. We want this to be a long-term thing. We do want it to be useful, even without any payment. If there is a paywall, we want that paywall to be far enough so that there is something in there for everybody.’

Jackie Timmons, the council’s shared repairs service manager, labelled the idea a ‘virtual owners’ association…  This should take that responsibility… and make it an open and transparent platform.’

The council’s finance and resources convener, Cllr Alasdair Rankin, has also welcomed the ‘significant step in the right direction’. He added: ‘This is a way of helping owners to take responsibility and to get over some of those hurdles that have been a major problem for them in the past. It’s going to be helpful in taking the legislation off paper and and putting it into a practical form that people can use. It addresses one of the fundamental problems that owners have which is communicating with each other and agreeing what the extent of the repair is and then going through a trusted trader scheme, which they can access on the app, and then they can take it forward themselves.’

The app will be showcased at a demonstration day at the EICC in March.

A Scottish Government spokesperson said: ‘As part of the Scottish Government’s digital directorate, CivTech brings together public sector expertise and private sector creativity to solve real problems, develop new digital products and deliver better, faster and easier services for everyone. We are delighted that the City of Edinburgh Council have chosen to support CivTech and sponsor this challenge to find new and innovative ways to use technology to better manage communal areas in tenements, and we look forward to seeing Novoville’s solution.’