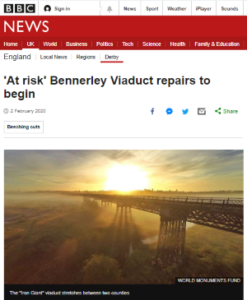 Vital repairs to a Victorian railway bridge, Bennerley Viaduct on a global ‘at risk’ register will start within weeks, supporters have said.

Bennerley Viaduct, which stretches between Nottinghamshire and Derbyshire, has stood derelict since 1968.

The “Iron Giant” is one of only two such structures in England.

The work – the first stage in a £1m plan to open it to the public – was made possible when Historic England gave £120,000 to make up a shortfall.

It survived several attempts by British Rail to have it demolished and it is now owned by conservation group Railway Paths with the help of the Friends of Bennerley Viaduct group.

Last year it became the only UK location on the  2020 World Monuments Watch.

The Friends group said a repair plan had come in more expensive than expected and it needed an extra £120,000 from English Heritage to move the project forward.

The repairs will include work on brick pier bases, ironwork, abutments and the rebuilding of the parapets…

Ben Robinson, Historic England’s Principal Advisor for Heritage at Risk, said: “The importance of this viaduct cannot be underplayed, it’s one of only two surviving wrought iron railway structures of this type and is a stunning example of the genius of British engineering.

Jeff Wynch, chair of the Friends of Bennerley Viaduct, said: “We are absolutely delighted that the restoration work is about to begin and grateful that Historic England and other funding and advisory bodies are supporting the project to bring the viaduct back into public use.”