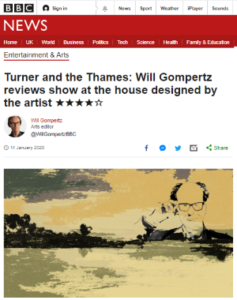 The BBC has reviewed a show at the house designed by the artist Sandycombe Lodge, Twickenham Turner and the Thames’.

Apparently, the great British romantic painter JMW Turner (1775-1851) once said if he could have his life again he would have been an architect: a statement that is as good an argument as any I’ve heard against reincarnation.

That’s not to say London’s finest landscape artist couldn’t have become a decent architect from a technical point of view. He knew his way around a set of plans having been apprenticed to an architect in his early teens, and would regularly include grand buildings in his paintings.

There is one place, though, where, for the first time since 1826, we can have a glimpse into a world where Turner the would-be architect and Turner the supreme painter of light and atmosphere, coexist.

It involves a trip to suburban Twickenham in south-west London to visit a small but perfectly formed Georgian house that Turner himself designed between 1807-13 (with a little help from his friend, the renowned architect, Sir John Soane).

….He liked the idea of owning a des-res in what the poet James Thomson described as ‘the matchless vale of the Thames’ – the riverside area seen from Richmond Hill taking in Kew, Twickenham, Isleworth and Richmond.

It was the Cotswolds of the day…

There is no evidence he painted with oils there, but he certainly sketched and probably went out on his specially made boat-cum-studio to paint in watercolours.

What is without doubt is his lifelong artistic relationship with the River Thames, an important motif most famously evident in his magnificent masterpiece Rain, Steam and Speed (1844).

It is, along with The Fighting Temeraire (1839), a painting that cements Turner as one of the most popular artists in the UK and beyond. They are both late works but you can see their origins in some earlier oil sketches he produced while living in Isleworth, which have been borrowed from the Tate Gallery and are now presented in a pocket-sized exhibition at Sandycombe Lodge.

The sketches are not masterpieces, nobody is going to pay millions of pounds to own them or view them (£8 entry to the house and exhibition), but they are well worth seeing: on their own terms and also as a way of understanding how Turner worked and developed as an artist. That they are in the house he designed for himself is an added bonus: there’s a lot to be said for quiet modesty in this overwrought, over-excited century.