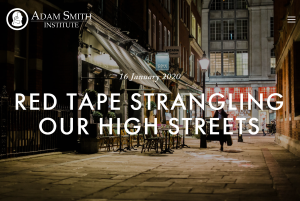 A new paper from the Adam Smith Institute – described by some as a the ‘neoliberal think tank’ – argues that the problem with the High Street has been totally misunderstood, saying that we need to reform restrictive planning rules and reject a policy of managed decline to reinvigorate our town centres.

With online shopping on the rise, and more people wanting to live in our cities, the high street needs to be made fit for purpose in the next decade. The free market think tank the Adam Smith Institute says that we should expect fewer big chains dominating the high street. Instead we should expect to see supermarkets and pharmacies next to yoga and dancing studios beneath residential apartments and the odd hipster cafe serving smashed avocado on toast.

Instead of a single street designed for chain shops concentrating retail and leisure uses  in one small area, creating dangerous inactive dead zones in our towns and cities, and separating retail from the residential areas where its users live — towns, cities and national planning guidelines should expand the areas that shops and cafes can set up to encourage mixed use.

The paper identifies four ways that national planning guidelines have led to dead high streets across the country:

Far from boosting growth, local plans have in many ways hindered our high streets, the report argues. The bureaucratic nature of local authorities and the policy making process means that local plans are often out of date, superseded by new developments, other policy documents and market changes, before new ones are adopted.

Plans are based on evidence gathered around a year or two before its publication, and local authorities are in constant political flux with a third of the council being reelected on three out of every four years. A ten-year plan is liable to be at odds with the policy direction of a new administration within a year or two of its adoption, or sometimes even before its adoption.

A lack of central planning can actually be a good thing when it comes to local planning. The Vale of Aylesbury Local Plan 2013-2033 was rejected by the Government in 2014, and remains unadopted to this day. It may seem counterintuitive when nearly one in ten shops stand empty across the UK, but making it easier to set up shop throughout Aylesbury has meant the local town now expects to double the amount of retail space by 2033. The town is allowing new shops to set up where they will be able to entice people in, where punters want to be, and where rents will be competitive.

The Adam Smith Institute recommends seven ways that the government could bring life back to our high streets across the country by learning from this example.

For Britain’s high streets and town centres to remain active and viable, a looser approach to planning is needed which is better able to respond quickly to changes in technology, habits, and markets. For the retail industry to survive and compete effectively against growing online competition, retailers need to be free to adapt to their customers’ needs in terms of floorspace and location.

A move away from zoning is required to allow local authorities and town centre economies to grow, adapt and survive. We need to remove the red tape strangling Britain’s high streets.

“Everybody knows Britain’s high streets are struggling. In order for that to change we need a new approach to planning policy that gives our town centres the flexibility to react and adapt to rapidly changing economic conditions and consumer needs. We need to move away from the old idea of dedicated retail zones and embrace a more dynamic, mixed-use approach to make our town centres prosperous and create a safe and active environment for residents, workers and visitors.”

“High streets across Britain have too often become soulless and empty, and we risk creating a country of ghost-towns. Our one-size-fits-all national planning rules don’t fit anyone or anywhere. We need to encourage the dynamic use of high streets and mixed-use retail, residential and commercial across towns if the government is to revitalise forgotten communities.”

“This report is an excellent exploration of the challenges our towns are facing, and how reconsidering restrictive zoning can potentially help reinvigorate them, to ensure our town centres thrive in the new decade.”