IHBC notes: No time limit for listed building prosecutions based on conviction for GII demolition 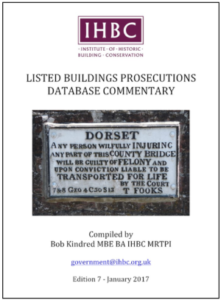 Bob Kindred, who manages the IHBC national dates of prosecutions, said: ‘As the property was in a rural location and no reports had been received from neighbours the offences had therefore gone undetected for more than a decade.’

‘The importance of this case is that it reinforces the fact that there is no time limit when bringing a successful listed building prosecution and that the compliance with heritage legislation cannot be evaded by assuming a relatively secluded location.’

‘The owner pleaded guilty in court in January to both the unauthorised demolition of one listed building, and the unauthorised extension of another and was fined £1,500 with £150 victim surcharge and costs of £1,448.’

Greg Cropper, a former chairman of the Holme Valley Parish Council, had the building knocked down and replaced with a new property at the farm in Upperthong, near Huddersfield.

Mr Cropper tore down the building after being refused permission to change its use to a residential property, so decided to erect a new one in its place.

The 62-year-old was prosecuted by Kirklees Council after the authorised demolition which may date as far back as 2008.

Mr Cropper was taken to court by the local authority after the alterations came to light when he applied for the farm building’s use to be officially changed to a dwelling.

A listed building inspector who visited the farm discovered a much newer building than expected, which in turn led to Mr Cropper being prosecuted…. Another property on the same site had also been extended, again without permission.

The crime went undetected for more than a decade due to the farm’s rural location and no reports of the demolition from neighbours.

Coun Rob Walker, Kirklees Council’s Cabinet Member for Environment, said the prosecution sent a message that anyone flouting the law over listed buildings could face court action…. “The council is often accused of not protecting our heritage… But taking action in this instance, despite the time that had passed between the act and its discovery, shows just how seriously we take the protection of listed buildings…. I hope that this case serves as a warning, that no matter how well you cover your tracks and for how long, your actions will catch up with you and there will be consequences.’…

See the IHBC national dates of prosecutions and other related resources