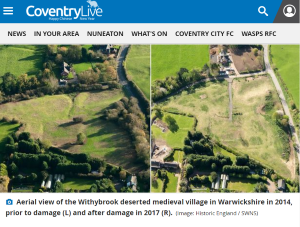 Warwick Crown Court is levying costs of £160,000 – a total fine of £90,000, costs of £70,000 and victim surcharges of £360 –for the destruction of a historic medieval village in a ‘cynical act of cultural vandalism’ by the convicted when carrying out substantial work on their own land in Withybrook.

Bob Kindred who maintains the national Listed Buildings Prosecutions Database said: ‘Although the Secretary of State and Historic England are responsible for Scheduled Monuments, the IHBC database includes comparable prosecutions for works to monuments without consent.’

‘This latest fine is very substantially above other recent cases we have recorded; reflecting its serious nature, wilful disregard by the site owner and a welcome reminder that irreparable damage of this kind is totally unacceptable.’

‘Historic England is to be commended for bringing this case to trial – and note that if the perpetrators do not pay their costs within 6 months a custodial sentence may be imposed. A salutary warning to others.’

A family has been ordered to pay costs of £160,000 for destroying a historic medieval village in a ‘cynical act of cultural vandalism’.

…The family repeatedly ignored warnings and carried on digging up the ground without the required consent, causing irreparable damage to an ancient monument.

They laid a 13ft-wide track and installed a water pipe, troughs and gate posts between 2015 and 2018 so they could graze horses on the land, it is believed.

Historic England brought the unusually rare case against the Macs after they carried out the work without the necessary Scheduled Monument Consent.

They face being sent to prison for 14 months if they do not pay the costs in full by September.

… The court heard how local residents raised the alarm with Historic England over the damage…   The site is home to a 12th century deserted medieval village and its remains survive as shrunken earthworks.

But despite written and verbal warnings from its inspectors and Rugby Borough Council the Macs carried on causing damage to the site.

The ‘deliberate and sustained’ construction of the track damaged and destroyed the recorded medieval earthworks. Historic England said this led to the total loss of an important medieval trackway, or hollow way, and damage to the site of a medieval building.

…All three were said to have known the site was protected and of their responsibility in safeguarding its significance.

Andrew Wiseman, Historic England’s General Counsel and Corporate Secretary, said: ‘The unauthorised works to the site of the deserted medieval village of Withybrook have caused irreversible harm…. features have been disturbed, damaged and destroyed without consent.’

… Councillor Jill Simpson-Vince, Rugby Borough Council portfolio holder for growth and investment, said: ‘This cynical act of cultural vandalism has caused irreparable damage to a protected historic site of national importance.  The severity of the fines imposed by the Judge sends a clear message to landowners who choose to ignore advice from our planning team and flout the law.’

There are around 3,000 known sites of deserted or shrunken medieval settlements in England.

Of these, only 460 are of higher enough quality of preservation and significance to be protected as scheduled monuments.