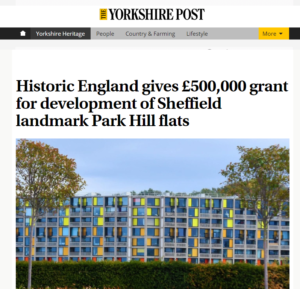 The Park Hill flats overlooking Sheffield will benefit from a £500,000 restoration grant from Historic England for the next phase of their redevelopment, The Yorkshire Post has reported.

The colourful 1960s apartment blocks are considered to be among the most iconic architecture in the city and Park Hill is Europe’s largest listed structure.

Historic England have given developers Urban Splash the grant to fund repairs to the concrete structure of the buildings.

The company has already created 260 new homes and 10,000ft of commercial workspace as part of the first phase of rejuvenation. The former social housing estate, which is close to the railway station, has since become one of Sheffield’s most desirable city centre addresses.

… The second phase, which is due for completion in 2021, will see another 195 flats refurbished and further workspace opened.

Historic England has now contributed a total of £900,000 to the project.

The Park Hill estate was built between 1957 and 1961 as a futuristic and pioneering post-war housing scheme. Many of its first residents came from demolished slums, and ‘brutalist’ architects Jack Lynn and Ivor Smith wanted to recreate the community feel of the old terraces by designing ‘streets in the sky’ to encourage social interaction….

“Park Hill is a phoenix rising from the ashes. After years of decline and neglect, this housing estate is once more becoming a symbol of Sheffield’s pride, innovation and ambition.

“Phase One has successfully given Park Hill a new lease of life and restored its reputation. We hope that Phase Two will continue this rejuvenation of one of Sheffield’s most prominent buildings.

“Like all good historic building redevelopments, the Park Hill project retains the spirit and the most important physical characteristics of the original building, while confidently looking to the future.”…

In 1998, Park Hill was Grade II-listed, which meant it could never be demolished. However, its future vitality by this point was uncertain.

Urban Splash’s work was due to start in 2007 and their blueprint was for a mixture of apartments, business units and social housing. Construction was delayed by the recession and began in 2009, opening to residents by 2011…