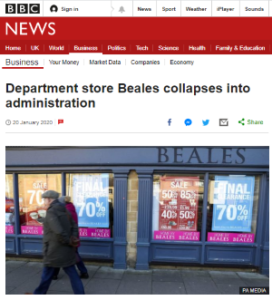 One of Britain’s oldest department stores, Beales, has collapsed into administration, putting more than 1,000 jobs at risk. Beales has appointed KPMG as administrators after failing to find a buyer or new investment for the business.

The department store began trading in Bournemouth in 1881 and has 23 shops.

There will be no immediate closures and Beales stores will continue to trade, although the website is offline.

Beales had tried to secure rent reductions with landlords and was in negotiations with potential investors and buyers.

But KPMG said: “Despite interest from a number of parties, this process did not secure any solvent solutions for the company, and as a result, the directors took the difficult decision to place the companies into administration.”

KPMG’s Will Wright, who is the joint administrator to Beales, said: “With the impact of high rents and rates exacerbated by disappointing trading over the Christmas period, and extensive discussions around additional investment proving unsuccessful, there were no other available options but to place the company into administration.

“Over the coming weeks, we will endeavour to continue to operate all stores as a going concern while we assess options for the business, including dealing with prospective interested parties.” …

Independent retail analyst Richard Hyman said it was “no surprise” that Beales had collapsed. “It has been fighting for survival for quite some time, as have many other department stores,” he said.

Mr Hyman said department stores were “very expensive to run” and faced “overwhelming” competition from other stores, particularly online rivals, predicting there would be “far fewer of them” in future.

“It is getting much, much harder to operate a department store profitably,”…

Beales has stores in the following towns and cities:

The company’s decision to appoint administrators comes at a difficult time for UK retailers.

Recent data from the British Retail Consortium revealed that retail sales fell for the first time in a quarter of a century last year.

John Lewis has warned that its staff bonus may be in doubt as it reported Christmas sales at its department stores were down 2% for stores open at least a year….

Some companies are prospering, however.

Sports fashion retailer JD Sports says it expects to report full-year profits at the top end of forecasts. Next lifted its profit forecast after better than expected sales over Christmas trading period.