IHBC’s ‘Heritage from the doorstep’… and the edge: Rare bandstand saved after Historic England listing support 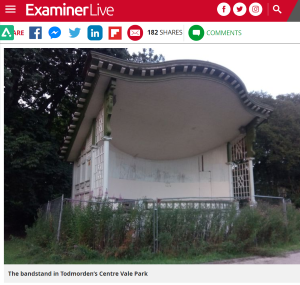 Calderdale Council had wanted to demolish a rare and local ‘theatre-type’ bandstand after the cost of refurbishing was put at £300,000, while ExaminerLive reports on how those plans changed following a successful application for listing was made to Historic England by the local community.

The future of a historic bandstand is up for grabs – again.

The  extremely rare example of a pre-First World War theatre-type bandstand in Todmorden has been safeguarded following the intervention of Historic England, which has now listed it.

A successful application was made by the local community to Historic England to list the building to help protect its future.

The Secretary of State for Digital, Culture, Media and Sport has added it to the national List…

Calderdale Council had wanted to demolish the bandstand, which was largely destroyed in an arson attack 20 years ago, and replace it with a ‘performance space’.

But more than 2,000 people signed a petition protesting against this – thought to be the biggest the council has ever received.

In the meantime a well-supported campaign group is working towards planning a practical future….

Historic England made the listing because:

Clr Jane Scullion, cabinet member for regeneration and resources, said: “The listing enables the local community to step up its work to secure grant funding for restoration, to bring the bandstand back to its former glory.”

The bandstand dates to 1914 and will need around £300,000 to refurbish it again to its original specification.

It has been subject to more vandalism attempts and has been fenced off for safety reasons for the best part of the last decade.

Calderdale says it has continued to work with the community to secure its future, seeking fundraising support for the required repairs.

In July as no community organisations had formally expressed an interest to take on responsibility for the bandstand, the council claimed it had no option but to pursue demolition and create a new performance space on the site.

Now the bandstand’s listed status has opened up new opportunities for the local community to apply for external funding to make the structure safe and give it a new lease of life.

The original bandstand was officially opened on Friday, 26 June 1914 by the Mayor, Alderman Robert Jackson, JP.

It is highly decorative, with its distinctive balustrade, consoles, prominent flowing cornice, window surrounds and metal grilles to the sides of the building.

Despite significant fire damage in 1999, great care was taken to faithfully conserve the bandstand…