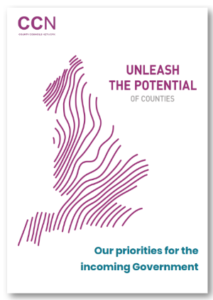 Leaders of England’s largest councils, through the County Councils Network (CCN), have urged new ministers to ensure that their pledge to unleash the potential of the country does not ignore the needs of ‘left behind areas’ in shire counties.

A post-election analysis from the County Councils Network (CCN), which represents 36 county local authorities, shows that 43% of the new seats (22 out of 51) won by the Conservatives in England… are in shire counties, whilst 54 out of the 100 ‘left-behind’ towns identified by the government in its Stronger Towns Fund are in these areas.

… a new document… sets out how the government’s policies can help ‘unleash the potential of counties’. County leaders call for their areas to receive a fair share of funding for public services, more investment in economic growth, and an extension of devolved powers to the shires.

The CCN argues that a ‘misconception’ that shire counties are all affluent and city-centric regional devolution policies could prevent them being able to invest in their towns and deprived communities as part of the levelling up agenda. These councils span the North and Midlands alongside rural and coastal communities in areas of the south, west and east…..

The priorities outlined in the document are:

…  The document also calls for the government to abandon a ‘city centric policy obsession’ in Whitehall to help unleash the potential of counties, such as: