IHBC’s conservation in context: ‘How the scramble for sand is destroying the Mekong’ 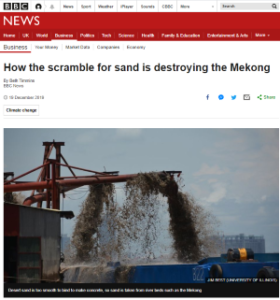 A crisis is engulfing the Mekong River, with its banks collapsing and half a million people at risk of losing their homes, all from ‘the quest for sand… the essential component for… particularly… cement’, generating calls that ‘Sand… be recognised as a strategic material, not just an endless supply.’

The entire ecosystem of this South East Asian river is under threat, all because of the world’s insatiable demand for sand.

Extracted from the bed of this giant river in Cambodia and Vietnam, sand is one of the Earth’s most sought-after resources. Up to 50 billion tonnes are dredged globally every year – the largest extractive industry on the planet.

“Extraction is happening at absolutely astronomical rates, we’re having an industrial-scale transformation of the shape of the planet,” says river scientist Prof Stephen Darby at Southampton University.

His studies on the lower Mekong show its bed has been lowered by several metres in just a few years, over many hundreds of kilometres, all in the quest for sand.

From highways to hospitals, sand is the essential component for industries as varied as cosmetics, fertilisers and steel production – and particularly for cement.

In the last two decades demand has increased threefold, says the UN, fuelled by the race to build new towns and cities.

China consumed more sand between 2011 and 2013 than the US did in all of the 20th Century, as it urbanised its rural areas. Sand is also used to bulk up landmass – Singapore is 20% bigger now than it was at the time of independence in 1965. ‘Every year we extract enough sand to build a wall 27m (89ft) high and 27m wide, all the way around the world,’ says Pascal Peduzzi of the United Nations Environment Programme.

Not any old sand will do. Desert sand is too smooth and fine to make concrete. Nor is it the kind that is needed to make glass or be used in the electronic industry.

So that is why sand is sought from ancient deposits in quarries – static extraction – or through so-called dynamic extraction from the sea and rivers like the Mekong.

Mr Peduzzi says dynamic extraction can be particularly damaging: “The sand is part of the ecosystem and plays a vital role, which if lost effects biodiversity, erosion and increases salinisation.”

According to conservation charity WWF and the Mekong River Commission, the bed of the two main channels of Mekong Delta lost 1.4m in elevation in the 10 years to 2008, and between two and three metres have been lost in elevation since 1990.

Research in Nature, published last month, says that the sand mining on one 20km (12.5 mile) stretch of the river is ‘non-sustainable’ as it cannot be replaced fast enough by natural sediment…

It is not just a threat to the humans…

The Mekong is not the only place where the grab for sand is creating controversy. In Kenya and India for example, there have been violent clashes over the resource, which is consumed at a rate of 18kg for every person on the planet each day…

At the same time, limits to supply of river sand are being put in place. Vietnam and Cambodia officially banned sand exports from the Mekong River in 2009 and 2017, respectively.

But the situation illustrates what Mr Russell describes as a global absence of transparency. “If you don’t actually know what you’re consuming or where its coming from or going, it’s incredibly difficult to take informed management decisions.”

There is a lack of data, Prof Darby agrees. “The major difficulty with sand mining is that the lack of governance tends to mean that there is not any systematic data on the extent and magnitude of the trade globally.”…

“Sand has to be recognised as a strategic material, not just an endless supply.”