IHBC’s ‘Heritage from the (UK) doorstep’: Rebel alliance ready to put a halt to the ‘disneyfication’ of Edinburgh 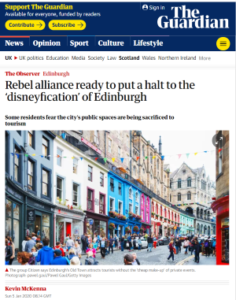 Some residents of Edinburgh fear the city’s public spaces are being sacrificed to tourism, and The Guardian offers a UK-wide take on the challenges.

For 800 years or so the castle that keeps watch above Scotland’s capital has borne witness to the bloody rise and fall of kingdoms and nations. Now, the war is one of ideas, with Edinburgh’s eternal soul on the line.

On one side is Underbelly, the London events company which claims to have taken Edinburgh’s Hogmanay celebrations to another level. It is backed by a city council which has gleefully watched the numbers rise in those indexes that confer tourism superstardom: unique-users, profits and exposure.

Facing them is a rebel alliance of permanent residents and community enterprises who are aghast at the creeping “disneyfication” of one of Europe’s most beautiful cities. Mike Small is co-founder of Citizen, launched last April to bring together local groups seeking to restore Edinburgh as “a place for people rather than profit”.

“Tourists have flocked to Edinburgh for centuries, attracted by its natural beauty and its wonderful built heritage,’ he told the Observer. ‘It doesn’t need to put on cheap makeup and fancy new clothes to make itself look good. Each year the Hogmanay celebration and the Christmas market on Princes Street Gardens that accompanies it, together with the ever-growing international festival and fringe, eats up more and more of our public spaces.”

In the wake of claims that permanent residents were made to wear wristbands and seek permits for private visitors to their own homes during the Hogmanay celebrations, more than 1,000 residents have applied to join Citizen. A campaign of “civic sabotage” has already been discussed. Protesters could film roped-off events on smartphones and then beam footage onto buildings in neighbourhoods where residents resent being charged up to £170 to go into their own city centre to see them. Flash crowds well-briefed in Scotland’s public access and right of way laws may also seek admission at entry hotspots in the security cordon.

Underbelly and the council claim their winter festivals are raising the profile of Edinburgh and bringing in much-needed tourism revenue….

….the company calculated that the community benefit was more than £1m and that the combined contract for the two events saves the city £1m per year.

Underbelly’s Ed Bartlam, who co-directed Edinburgh’s Hogmanay last week, said: “Balance is the key word. You’ve got to find the balance of viewpoints. There’s a view of some people in the city that there’s too many events related to tourism. But there’s a huge majority, I think, that just love these events….”

Small questioned how savings to the city were calculated. “It’s disingenuous to talk about savings and huge visitor increases. Edinburgh has been one of Europe’s most popular visitor destinations for decades. Have we reached a point where the main measure of a city’s worth is calculated in increased profits and privatising the heart of the city?

“At this time of year our own citizens who pay for the city’s year-round upkeep want to come together with friends, family and visitors from overseas without paying a private company for the privilege.

“What we are seeing here is a process where everything is commoditised and where the need to make bigger profits is more important than the lived experience and culture of the city itself. Nor has there been anything resembling a public consultation about any of this.”

As well as producing Edinburgh’s Christmas and Hogmanay, Underbelly has put on Christmas in Leicester Square, West End Live in Trafalgar Square and Pride in London for Westminster city council. Critics say it may soon become difficult to differentiate one festival from another as their unique identities are lost in endless pop-up stalls, “Bavarian” markets and open-air concerts….