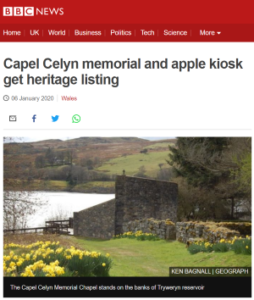 A memorial to a lost village and an apple-shaped refreshment kiosk are two of the sites given a heritage listing in Wales in the past year.

The Big Apple in Mumbles, an iconic feature and described as “a rare and unusual example of a seaside refreshment kiosk” is also listed.

In 1965, Capel Celyn was controversially flooded in order to create a reservoir which would supply water to Liverpool….

The Gwynedd village’s school, chapel, post office and houses were lost beneath the Tryweryn reservoir.

A memorial chapel was built on the side of Tryweryn using stones that were once part of the buildings in the lost village.

Welsh Water chief executive Chris Jones said listing it reflects “its cultural significance and its crucial importance to the local community and the history of our country”….

The sites that were made scheduled monuments included the Llanerch-y-Mor smelting chimneys in Holywell and Ffynnon Angoeron (the Freezing Well), in Goetre Fawr, Monmouthshire.

There is also the remains of a Lockheed aircraft abandoned in 1942 and now buried at Morfa Harlech National Nature Reserve.

From World War Two, “pill box” anti-invasion defences at St Mary’s and Tresilian Bay, both in Vale of Glamorgan, are the fourth and fifth monuments listed.