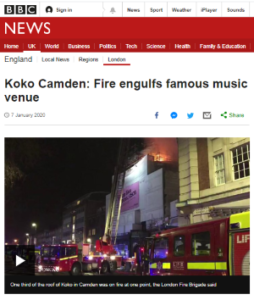 One of London’s most famous music venues Koko Camden has been badly damaged in a blaze.

The dome on the roof of Koko in Camden has been destroyed by fire, according to the London Fire Brigade.

Sixty firefighters helped fight the flames after the blaze broke out just before 21:00 GMT on Monday. No injuries have been reported.

The venue began life as the Camden Theatre in 1900 and has hosted stars including Madonna, Coldplay and Prince.

Station commander Jon Lewis said the fire was brought under control at about 02:30 on Tuesday, adding: “Firefighters’ quick action and hard work in the early stages meant the fire was contained to the roof and saved the rest of the building.”

Koko owner Olly Bengough said he was “deeply saddened”, adding: “We’ll be doing our best to get the redevelopment of this iconic building back on track.”

Koko, which was closed for refurbishment, was also previously known as the Camden Palace and Camden Hippodrome and has been one of the capital’s most iconic live music venues for decades.

The Rolling Stones, The Clash and Ed Sheeran are among other star names to have performed at the venue…

Koko and the nearby Roundhouse effectively ‘bookended’ Camden’s music scene, according to music writer Carl Allen.

On Twitter, the Roundhouse said it was “really sad” to hear the news about its Camden neighbours.

Camden Council leader Georgia Gould said on Monday night: “Heartbreaking watching the Camden Palace/Koko up in flames this evening, a building that holds so many memories and means so much to us in Camden.”

The venue was set to reopen in the spring after a “major state-of-the-art” refurbishment, after the purchase of two adjacent buildings.

An investigation is under way into how the fire started.