IHBC’s IMHO: ‘When council estates were a dream’, from the BBC 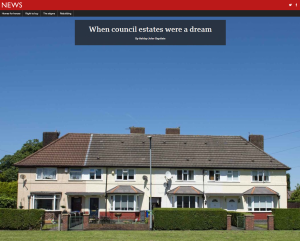 Ashley John-Baptiste has written a reflective piece on Council housing now posted by the BBC.

Joanne has lived in Wythenshawe for half a century.

She lives on the estate with her partner Nelly and their son in the Benchill neighbourhood.

Their house is semi-detached, with pastel-coloured render covering the exterior and a red tiled roof. There are a couple of satellite dishes. In the concrete front garden the family car is parked.

Light floods the living room. There is an imposing fireplace, topped with a mirror. “I love the fireplace,” says Joanne. “I’m proud that I put it in myself.”

She owns the house but it hasn’t always belonged to her. Until 2005 she rented it from the council.

The improvements are worth it, she thinks. “My dad used to tell me – that when I close my front door, my house is my castle. I have to make my space comfortable.”

Her work has maximised the space. “I’ve taken out the kitchen toilet and have made a larder for my jars in its place.”

A sign in the kitchen reads: “Joanne’s Kitchen: Where friends meet and hearts warm.”

But her favourite place is the back garden. Filled with lush plants and bushes,  and dotted with stone features, the garden has a narrow pathway that curves through a patch of neatly trimmed grass.

It’s a tranquil space and testament to two things – the pride former tenants take in their houses and the century-old spirit of the garden city.

Joanne moved to the area when she was seven, with her parents and six siblings. She still remembers people telling stories about the early days of Wythenshawe.

“It felt like the countryside, I was told. There were horses in the fields – much more of a green belt than what it’s now become.”

Wythenshawe is one of the oldest council estates in the UK and was one of the largest. But it has had to endure criticism over the years.

In 2007, when Conservative leader David Cameron wanted to highlight the issue of anti-social behaviour, he went to Wythenshawe. A photograph of a hooded youth pointing his fingers like a gun was widely used in newspapers.

Parts of the comedy Shameless were filmed in Wythenshawe, and last year a Channel 5 documentary was criticised for highlighting sensationalist comments about the area….

… The stigma that many tenants now feel is a long way away from the original spirit that drove the construction of council houses.

Wythenshawe and dozens of estates around the country were born out of an extraordinary change 100 years ago – a vision of how housing should be in a country recovering from a cataclysm.

On 23 November 1918, less than a fortnight after the end of World War One, Prime Minister David Lloyd George set out his vision.

The era of the council home started with an influx of returning soldiers, sailors and airmen and the feeling they should not return to the slums of the pre-war era.

There was broad support for lower-density housing built on cheaper, rural land.

There had been public housing in Britain in the 19th Century built by philanthropists, charitable trusts and councils. But the end of World War One saw the first concerted nationwide effort for public house construction. Standards were to be improved.