IHBC’s ‘Heritage from the doorstep’: Kirklees Council is taking allotment holders to the Royal Courts of Justice 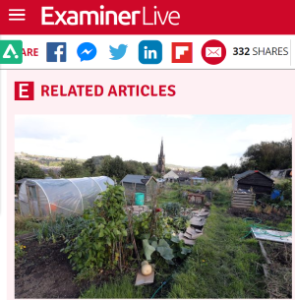 Huddersfield allotment holders won the fight to save their land – but Kirklees Council has appealed the judicial review so allotment holders face a new battle in the High Court in London, reports Examiner Live.

Allotment holders in Huddersfield who won a judicial review to save their plots from being bulldozed face a new battle in the High Court in London.

Kirklees Council has been granted an appeal into the ruling.

The two-day appeal will take place in February at the Royal Courts of Justice.

Campaigners were jubilant in May when judge the Honourable Mr Justice Kerr ruled that land at Cemetery Road in Birkby, which had been appropriated by the council for new school playing fields, was permanent allotments.

The council wants to take part of the allotments as part of the £9.7m Brambles Primary Academy in nearby Clare Hill.

It says it wants to ‘re-purpose’ the land at Cemetery Road for the benefit of children that will attend the proposed school, and therefore it will pursue its plan.

Following the judicial review, at the High Court in Leeds, only the Secretary of State for Housing, Communities and Local Government, James Brokenshire, could intervene to take the land for educational use.

In a judgement handed down on May 10 the judge refused the council permission to appeal against the verdict.

However the council filed its appellant’s notice on May 29…

Campaigners confirmed that the appeal is to go ahead.

Allotments group spokeswoman Debby Fulgoni said: “We hoped that they would not be granted leave to appeal, but they have.

“How much money is this going to cost them to take it this much further?

“Everybody has been wishing us well. People are going to say, ‘Not again. I thought we had won this’.

“The council have given our allotments back to us but what are they going to do if the appeal goes through?”…..

Prior to the hearing in March plotholders set up a crowdfunding page to raise £2,500 to cover their legal bill.

When they won the case Kirklees Council agreed to pay the allotment holders’ costs, which exceeded £12,000.