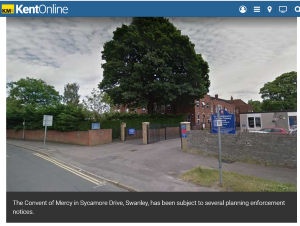 The owners of a former convent have been fined £4,000 and ordered to pay £10,000 costs after they continued using it as an illegal hostel.

Nuns used to occupy the Convent of Mercy, Sycamore Drive, Swanley, but in recent years its residents have been more problematic.

Owners Bhupinderjeet Kullar and Narinder Kullar were issued with two planning enforcement notices by Sevenoaks council in December 2016, requiring them to cease use of the property as a hostel.

An order was obtained from Sevenoaks Magistrates’ Court following repeated anti-social behaviour to close the building for three months while concerns were addressed by the leaseholder.

Mr and Mrs Kullar were fined a combined total of £4,000 at Woolwich Crown Court on December 2 for failure to comply with the notices and ordered to pay a further £10,000 costs.

Leaseholder Mustafa Kemal Mustafa, who ran the hostel, was also fined £15,000 in August for failure to comply with the notices.

It follows numerous official actions dating back to 2014.

Abatement notices were served due to foul smelling bonfires and unacceptable noise in 2014 and 2016, while the police have repeatedly attended…

Numerous safety notices were also served on the owners by the Health and Safety Executive (HSE) after issues were raised about the safety of the electrical supply.

The council’s planning team manager, Alison Salter, praised her colleagues and all those involved in bringing forward the prosecution.

She said the fine sent a clear message the authority will not tolerate people ‘who ride roughshod over the law’.

‘Mr and Mrs Kullar did not comply with our planning enforcement notices for a number of years,’ she said.

‘Only by taking action in the courts was it possible to close this unlawful hostel.’