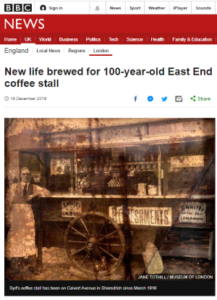 An east London coffee stall which has been run by the same family for a century is to be given a new lease of life once it shuts for the final time.

Syd’s coffee stall was opened by a World War One veteran who started it using his invalidity pension. It has been run by three generations of the Tothill family since then but will close on Friday after current owner Jane decided it was ‘time to move on’. The stand has been acquired to go on display at the Museum of London.

Sydney Edward Tothill spent £117 commissioning a local coachbuilder to construct the stall which has sat on Calvert Avenue in Shoreditch since March 1919. By today’s standards, the initial menu was a little limited.

‘Camp coffee’, a brown liquid made of essence of coffee-beans, chicory and sugar, was served alongside tea, cocoa and Bovex – described as a poor man’s Bovril. The snack of choice was a ‘Sav and a Slice’ – a saveloy sausage served with a slice of bread and English mustard.

During World War Two, Syd and his wife May were given a special licence to remain open during blackouts so that they could cater for air raid wardens overnight. The stall was considered so essential that when May was injured by shrapnel from a nearby explosion, the War Office brought Syd’s son back from a secret overseas RAF mission so it could remain open. The son, also called Syd, successfully expanded it into a catering business called Hillary Caterers to commemorate Sir Edmund Hillary’s conquest of Everest in 1953.  Jane Tothill said reaching 100 years had been ‘an incredible milestone’ but ‘it was time for the stall to move on to tell a new story at the Museum of London’. Vyki Sparkes, curator of social and working history at the museum, said the stall was ‘an invaluable piece of our shared history as Londoners’. It will go on display once the museum moves into its new building.