10-bedroom mansion in New York state was offered for only $50,000, with one catch… a restoration proposal (conservation plan) 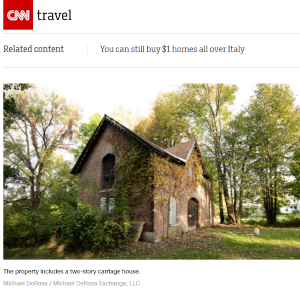 Until 18 December 2019 a 6,000-square-foot, 10-bedroom Victorian mansion could’ve been yours for only $50,000, but there was one catch; you had to put together a restoration proposal for the historic property in order to be considered.

Built in 1861, the mansion is in Auburn, New York, in the Finger Lakes region about 25 miles west of Syracuse.

The city of Auburn purchased the foreclosed property, and the city’s Planning Department partnered with real estate agent Michael DeRosa to come up with the unique method of sale.

‘This is not an auction, it’s a contest,’ DeRosa told CNN.

Prospective buyers had to state their intended use of the property, the restoration project timeline and cost, and restoration plan in order to be considered as a part of their application.

‘It’s not so much the buyer who offers the best price that is of importance here, it’s the buyer with the best intended use and plan to restore this mansion that really matters,’ said DeRosa.

The property once belonged to Auburn banker James Seymour, who was known for his philanthropic efforts. He founded the Seymour Library and the Auburn City Hospital.

The mansion sits on approximately an acre of land, and it has three stories, five bathrooms and four fireplaces. A two-story carriage house is also on the property.