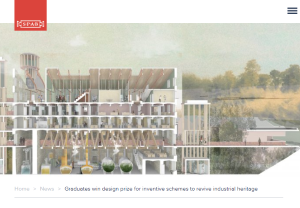 Each year, the SPAB’s Philip Webb Award celebrates new design in the context of historic buildings, and this year, first place was awarded jointly to University of Sheffield graduates Nikola Yanev and Olivia Hellman, for their schemes which gave imaginative new uses to derelict former factory buildings, with both winning schemes using a range of traditional repair techniques at the same time as embracing innovative new technologies and materials.

Olivia Hellman’s scheme established an urban dairy in a former calcining mill at Middleport in Burslem, Stoke-on-Trent. Her proposed new use neatly reflects the buildings’ local history; the mill was previously used to grind up cattle bones for making bone china, and the once-thriving ceramics factories in the area were historically supported by a local dairy industry.

Olivia Hellman said: ‘Burslem’s earliest potters were also farmers, producing pottery to support Stoke-on-Trent’s dairy industry. The combination of the two occupations supported each other, providing a balance. Given that the sole production of pottery is no longer a stable source of industry, the project argues for a return to the dairy farm, reimagining it in a contemporary and sustainable manner through promotion of dual production. Situated within a former calcining mill, the project offers the opportunity to mend place and the surrounding community as well as the existing built fabric and I am delighted that the project’s inventive approach has been recognised.’

Nikola Yanev said: ‘This project focuses on identifying a viable new use for abandoned heritage in order to secure its long term future and remove the risk of demolition, and the detrimental consequences of waste accumulation, disproportionate carbon emissions, embodied energy, and loss of local pride and identity. The current crisis of real estate provides an opportunity for heritage ‘at risk’ to be carefully and creatively repurposed rather than making completely new speculative proposals. The Grade II* Old Lane Mill in Halifax can act as a catalyst to strengthen the local area’s identity and generate further economic and social benefits.’

The SPAB was delighted to receive a high number of entries from students and graduates representing seven different schools of architecture across the country. The judges were impressed with the entrants’ willingness to challenge existing or consented plans for redundant buildings, and their concern for sustainability and community benefits. The judging panel this year were: Rebecca Harrison of Harrison Brookes Architects; Shahed Saleem of Makespace Architects; Charles Wellingham of Connolly Wellingham Architects; and Robert Davies of Thomas Ford & Partners.

For more background search the NewsBlogs