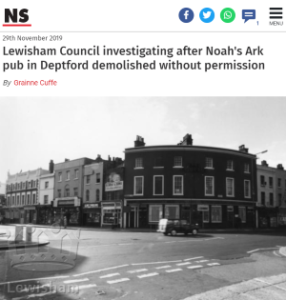 Lewisham Council stated that ‘planning permission had not been granted for the demolition of the building’ and that it is ‘a criminal offence to demolish a building in a conservation area.’

A developer committed a criminal offence when it demolished a protected former pub, according to Lewisham Council.

Developer Visionbell, which is based in Bloomsbury and was founded in 2016 according to Companies House, had only been given permission for a new mansard roof and to convert the building into flats.

Visionbell’s latest financial statement mentioned ‘concern’ that the company was in debt of more than £300,000.

The council is currently investigating and said the current permissions granted are no longer valid as the building ‘no longer exists’.

Deptford High Street was designated a protected area more than 40 years ago to recognise the ‘exceptional quality of the many buildings of historic and architectural interest’.

‘The building is located within the Deptford High Street conservation area, designated as a protected area in 1976 in recognition of the exceptional quality of the many buildings of historic and architectural interest.

‘Officers visiting the site saw that the building had been substantially demolished with only the ground floor frontage now remaining.

‘Whilst planning permission was granted for the addition of a mansard roof and the conversion of the property to residential use, planning permission had not been granted for the demolition of the building.  It is a criminal offence to demolish a building in a conservation area.  As a council, we have a duty to protect our heritage both for our current residents and future generations.’

‘Our planning enforcement team is continuing its investigations and will robustly deal with any contraventions.’