How a Camden Town Sainsbury’s became Grade II listed: ‘It was very, very controversial’ – a detailed history from the New Statesman 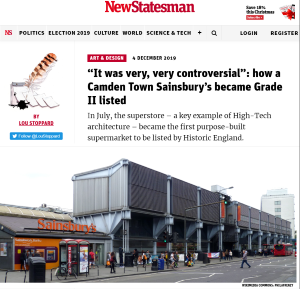 In July, Sainsbury’s Camden Town superstore – a key example of High-Tech architecture – became the first purpose-built supermarket to be listed by Historic England, and the New Statesman offers an uncommonly detailed and holistic take on the process.

On a recent drizzly Tuesday, the Sainsbury’s Superstore in Camden Town was doing a bustling trade. A man in a tweed flat cap bought a copy of the Daily Mail and considered, before rejecting, a £1.75 punnet of British strawberries. A young man in Nike trainers queued for cigarettes, greeting another customer with a nod. A man in a burgundy jumper and beige cord suit carried a lone butternut squash in his basket. Little was out of the ordinary, except, perhaps the man carrying a large suitcase, who bought 12 jumbo packs of antibacterial wipes.

Yet this Sainsbury’s is unique. On 19 July 2019, it became the first purpose-built supermarket to be listed by Historic England, which gave it Grade II status. Designed and built between 1986 and 1988 by Nicholas Grimshaw and Partners, it was praised by the listing report as a key example of High-Tech architecture, a style pioneered by Grimshaw, alongside firms such as Fosters and Rogers, which favours grainless modernity – all aluminium panels, smooth steel columns and interchangeability; mezzanines that can be adjusted, or cladding that can be moved around to reposition windows. The report called the Sainsbury’s ‘a rare example of the important but typically mundane post-war building type, the supermarket, being designed as a highly original, bespoke piece of architecture; a project made possible by the ambition of the architects, the client and the local authority.’ On this particular Tuesday, a blonde lady stood in the cold meats section. She shopped here quite a lot, she told me. She had ‘no idea’ about the listing, she said, surveying some prosciutto, before glancing briefly at the arched steel roof.

Neven Sidor was the lead architect on the project. It was, he tells me over the telephone, ‘one of the most stressful periods in my life.’ Grimshaw, who have since built the Eden Project in Cornwall and The National Space Centre in Leicester, were at the time a small office of about fifteen people. Only seven worked on this project, which was tricky, Sidor explains, as the supermarket was part of a broader complex featuring two other buildings, of all which Grimshaw’s team were tasked with designing – one is a set of workshop spaces, sat high above basement parking, which face onto Kentish Town Road; the other is a row of terraced housing facing the Regent’s Canal. ‘We don’t do easy projects. We only do really difficult projects, that are only just possible,’ says Sidor. ‘There was this huge pressure from Sainsbury’s to be open by Christmas.’

While architecture fans may notice the striking silver facade, most passing Londoners are more likely to notice how unusual it is to have such a large supermarket in this bustling location, just a minute or so from Camden Town tube station and the market, with all its excitable tourists and sullen teenage goths….

… the supermarket looms large in the UK imagination – a hub for gossiping, congregating, judging and flirting. A place where someone keeps an eye on your nan as she pops in on her errands. A place where teenage couples share a first kiss against the romantic backdrop of a ‘3 for 2’ offer. In Pulp’s Common People, the education into the life of the everyman begins, of course, here: ‘I took her to a supermarket, I don’t know why, But I had to start it somewhere.’

At the Camden Sainsbury’s, large windows allow passers-by to glance inside, and survey shoppers lapping the aisles. If you’re approaching from the canal, the set of silver houses block the view of lorries entering and leaving. ‘It looks like a spaceship has landed on the canal,’ says Deborah Mays, Head of Listing Advice at Historic England….

… Late in 2018, The Twentieth Century Society, a group which campaign to safeguard post-1914 design and architecture, received a tip off… that a planning application had been put in to redevelop Grand Union House. By January of 2019, the society’s caseworker Grace Etherington had commissioned a full report….

…She asked that Historic England list all the buildings together, as one complex, as they were designed. “The multiple usage thing was very pioneering at the time,” Etherington says.

… ‘If people aren’t aware of how ambitious these buildings are then it’s hard to get them to act in a sensitive way,’ she explains….

Around 300-400 buildings are listed by Historic England each year (this doesn’t include war memorials, which would increase the number exponentially). It’s hardly surprising that, until now, a supermarket hasn’t made the cut…

… While Grimshaw’s Sainsbury’s is now listed, it is, as Mays say, not frozen. The move protects the building, but doesn’t automatically guarantee it will keep its purpose. Some hungry developer, down the line, may think it could make a great delivery depot, or Amazon pick-up centre, or some hyped-up co-working space. A total change would be a shame, says Sidor; ‘People talk about how the next decade isn’t going to be about goods but experience – maybe Sainsbury’s could reconfigure it to a new pattern of trading.’ It could make a good gym, muses Etherington. Or office space, offers her colleague Croft, though she hopes not. ‘I hope it remains a supermarket for as long as possible,’ she said. ‘Not least as manifest evidence that not all supermarkets need be architecturally uninspired.’