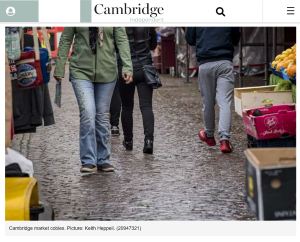 IHBC member and Policy Committee vice chair John Preston has drawn attention to an unusual listing application success in Cambridge that has important ramifications for the wider local economy as well as the neighbourhood, accompanied by a timely reminder from Historic England that ‘All the small things matter’!

Campaigners trying to save the market square’s cobbles are celebrating after they managed to win the stone setts grade II listed status.

A recent feasibility study ordered by the city council had suggested removing the cobbles and replacing them with paving was an option in order to redevelop the square so it could be used in the evenings and for entertainment purposes.

But after an uproar from some traders and shoppers an application was made by local campaigners to have the cobbles and Victorian railings in the market protected by historic England.

Now any plans by Cambridge City Council to develop the square will have to take into account the cobbles’ historic status.

Campaigner Glenys Self, a market trader and founder of the Friends of Cambridge Market, said: ‘This is good news for Cambridge Market, traders and shoppers, sightseers and chiller outers….and for the whole city, region, country and, as we are a World Heritage City, for the whole world, who come here to see this beautiful old famous Market.

Glenys has campaigned to have the cobbles relaid and retained since becoming concerned that any redevelopment of the market could see them dug up and removed….

John Preston… former historic environment manager at the city council, made the application for the listing. He said: ‘I’m delighted that the historic character of the railings and the setts is being recognised.’

The listing by Historic England said the grading had been given because of the ‘architectural interest’ of the setts and railings. They explained: ‘the setts are an integral part of the mid-C19 scheme for the expansion and re-laying of the Market Place and can be accurately dated to 1855-1856;given that the use of granite setts only became widespread from the 1830s, this is a relatively early surviving example of a large area of historic paving; the handsomely designed railings are of good quality ironwork and, other than one gate, are in their original condition.’

They added the railings made ‘an important contribution to the historic streetscene; along with the Grade II listed fountain in the centre of the Market Place, they form a significant ensemble of historic street furniture in the commercial and civic heart of the city.’

The city council, which has recently carried out a feasibility study in which several options envisaged removing the stone setts.

Joel Carré, head of environmental services at Cambridge City Council, now confirmed the cobbles and the railings would be ‘acknowledged’ but that a key objective was making the market square ‘an accessible which all sections of the community are able to safely access and enjoy.

‘The existing uneven surface of the square and associated changes in kerb level currently make it difficult for those less physically able to easily access and enjoy the space. In the next phase of the project, we will be working to ensure the implications of the various listed structures associated with the space are fully understood and reflected in the proposed vision and concept design plan.’

He added that ‘areas of setts could be re-laid to improve levels’ for wheelchair users but that the council expected local building consent ‘would not be forthcoming for removal of the setts, as it would be a major change in character and so contrary to Local Plan policy/ national guidance.’

It is brilliant that the setts (known to locals as cobbles) and railings in Cambridge’s Market Square have been listed.  When questioned about the cobbles at the 50th anniversary of Cambridge’s Central Conservation Area, Duncan Wilson, Chief Executive of Historic England. said: ‘Don’t underestimate the importance of small details and materials. Changing them can completely change the character of an area. All the small things matter.’

When I drafted the application for listing for the Friends of Cambridge Market, I thought it was a very long shot: I had never previously (in my 45-year career) known of flat floorscape being listed.  Now I find myself being stopped in the street and congratulated, but the credit should go to the stallholder Glenys Self who set up the campaign to save the cobbles.

However the listing of the cobbles (setts) is really only ‘base camp’. The question of what happens to them remains.  Arguably the greatest challenge is how to protect the historic activities which take place upon them.

The City Council and the Greater Cambridge Partnership want to make the Market Square more of a civic space, but the historic significance of the market is not well recognised  as one consultant’s report notes that ‘Market Square is a well-proportioned hard space that holds heritage elements, including the listed fountain and historic set paving. However, as the most prevalent feature of the space, the market use currently hides many of these features…. Views towards key facades are restricted by the central market in particular prominent buildings such as Great St. Mary’s and the Guildhall.’

For some this may be a strange notion, that a historic Market (albeit carried on in modern stalls) impedes views of the (much later) listed buildings on and around it!  Contrast this with the Victoria County History’s assessment: ‘Cambridge was and is an important market centre. The market stands on one of the oldest inhabited sites of the Borough and perpetually reminds the observer that the town is older than the University and has an independent raison d’être. No grant of a market by charter was necessary; it was established by local need and ancient custom well before the Norman Conquest’  [The City of Cambridge: Economic history, Victoria County History, London, 1959).

For thoughts and comments contact John Preston at jpreston@phonecoop.coop

Surfaces such as paving are an under-researched aspect of the historic environment. Their contribution to the historic environment can be considerable, as in St Ives (Cornwall), where over a dozen stretches of such surfaces have been listed as a reflection of their visual contribution and special interest to the town (eg Fore Street, List entry 1143372 https://historicengland.org.uk/listing/the-list/list-entry/1143372 . The street surface of granite blocks along the entire length of the street is listed at Grade II. The many listed street surfaces around St Ives add significantly to the unique character of the historic environment in that area). Some surfaces, such as the rough masonry of the Vicars’ Close in Wells (Somerset), may date back to medieval times, albeit with campaigns of repair. Surviving examples of eighteenth-century paving consisting of roughly squared stone with rubble infill can be found in London (principally in the Inns of Court) and Bath, where Pennant slabs offset the Royal Crescent (and are included in the Grade I listing) and other grand set-pieces of architecture. Other thoroughfares were covered with cobbles: the cobbled road surface of Merton Street, Oxford (fronting and complementing the Grade I listed Merton College), is listed, for instance (List entry 1119637 https://historicengland.org.uk/listing/the-list/list-entry/1119637 ). The eighteenth century also saw the widespread introduction of granite, initially in the form of cobbles and then squared setts brought mainly from Devon and Cornwall. Hard to work yet extremely durable, granite became much more widespread from the 1830s when steam power and later railways facilitated its working and distribution. Wooden blocks, introduced from the 1830s onwards as a road surface, are more typical of nineteenth-century London, where there was a major mid-century campaign of resurfacing, but very few examples remain visible today (one is King Street, Rochdale). The extent of the survival of historic surfaces overall remains unquantified, hidden as they are beneath later asphalt covering, which was first used as a street surface in the 1830s although only widely from the early twentieth century.