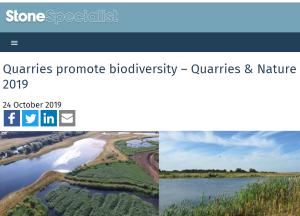 The Mineral Products industry is uniquely placed to deliver biodiversity net gain and has a track record of leaving better conditions for wildlife than before quarrying began, the Stone Specialist reports.

The Mineral Products industry is uniquely placed to deliver biodiversity net gain and has a track record of leaving better conditions for wildlife than before quarrying began. That was the conclusion from the Mineral Products Association (MPA) Quarries & Nature 2019 event presented by BBC Radio 4’s Farming Today presenter, Sybil Ruscoe, on Wednesday 23 October at The Royal Society, London.

MPA members manage or control an area of land totalling more than 115 square miles – the size of a small National Park such as the Norfolk Broads. Further, the Mineral Products industry has created at least 8,300hectares of UK Priority Habitats and has restoration plans to deliver at least 10,700ha more in the coming years as exhausted sites are restored.

Quarries & Nature 2019 attracted a capacity audience that included representatives of more than 70 leading environmental and conservation organisations and industry operators to celebrate the industry’s continuing contribution to nature conservation. It also explored how the industry can do even more to deliver a net gain and showcased some of the best examples of quarry restoration and wildlife conservation anywhere in Europe.

Nigel Jackson, Chief Executive of the MPA, said afterwards: “By creating new habitats during quarry restoration mineral products companies are uniquely placed to increase biodiversity and this year’s submissions and winners of our prestigious awards once again enrich and extend the legacy the industry has built over the decades.

“The mineral products industry is a pioneer in the field of nature conservation and is unrivalled by any other UK industry.

“Our achievements are not fully recognised by government, which consistently fails to appreciate how this industry can help them convert their aspirations for the natural environment into leadership and action on the ground.

“I hope this year’s Quarries & Nature event triggers wider recognition and a new conversation with the Department for the Environment, Food & Rural Affairs (Defra) in particular. We are very much part of the solution to the UK’s biodiversity challenges and are ready to play an even bigger role working with key stakeholders to protect and enhance UK biodiversity.”

The Cooper-Heyman Cup for outstanding restoration was jointly awarded this year to Aggregate Industries and Tarmac.

Aggregate Industries worked with Yorkshire Wildlife Trust, Middlemarch Environmental and Greenfields Countryside Ltd at Ripon City Quarry in North Yorkshire to enable a diverse mixture of priority habitats to be created. The Awards judges described this as a well-researched and implemented scheme and a great asset to the area.

Tarmac’s Broom Quarry, Bedfordshire, was formerly a sand and gravel pit that has been restored to a mixture of wildflower meadows, wetlands, woodland and farmland. The judges described it as a ‘massive transformation’ on what was originally typical, uninteresting, agricultural land. The result is of great value to both the community and to wildlife.

In the Biodiversity Awards, the winner of the Landscape Scale category in association with Natural England was Aggregate Industries and RSPB for Venn Ottery Quarry, near Exeter, Devon. This is a 30hectare sand and gravel site in the early stages of restoration predominantly to lowland heathland. The restoration involves partnership with RSPB with heathland and meadow creation, plus specific features including an orchard and bat roost. The connectivity of habitats both within the site and beyond into the surrounding countryside is particularly impressive, thanks to the collaborative partnership with RSPB that was especially strong. Local communities were also deeply involved.

The overall winner of the Planned Biodiversity-led Restoration category was CEMEX and Northumberland Wildlife Trust (Save our Magnificent Meadows Initiative) for the Divethill Quarry Farm Extension Area, Capheaton, Newcastle Upon Tyne. This is an outstanding example of progressive restoration of a rock quarry to create an attractive landform and a mosaic of species-rich, locally important and distinctive ‘Whin’ grassland, agricultural grassland, woodland and hedges, and open water. The judges were impressed by the clear plan to deliver a range of habitats and realise the unique opportunity presented by quarrying to deliver regional priorities and wider landscape-scale benefits.

In the Biodiversity ‘Innovation’ category the overall winner was Hanson’s Floodplain Forest Nature Reserve (Manor Park Quarry) near Milton Keynes, where the restoration scheme has involved creation of lakes, ponds, wet woodland, swamp, marsh, fen and reed beds. These are transforming the landscape into a network of habitats which link with the main river, the Great Ouse. Channels have been engineered so that floodwater flows at different times and levels via inlets upstream and downstream, oxygenating the water, trapping silt and helping to control pollution. The project was undertaken in partnership with The Parks Trust, Milton Keynes.  The judges were particularly impressed by an ambitious scheme going beyond requirements realising opportunities presented by the location, ensuring the habitats are an integral and active part of the floodplain. This benefits a wide range of wildlife, landscape enhancement and other ecosystem services including flood and water management.