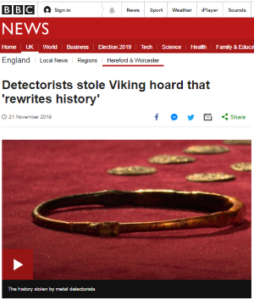 George Powell and Layton Davies dug up about 300 coins in a field in Eye, near Leominster, Herefordshire, in 2015. They did not declare the 1,100-year-old find, said to be one of the biggest to date, and instead sold it to dealers. They were convicted of theft and concealing their find. Coin sellers Simon Wicks and Paul Wells were also convicted on the concealment charge.

What is the significance of the hoard?

The hoard included a 9th Century gold ring, a dragon’s head bracelet, a silver ingot and a crystal rock pendant. Just 31 coins – worth between £10,000 and £50,000 – and some pieces of jewellery have been recovered, but the majority is still missing. ‘They must be concealed in one or more places or by now having been concealed have been dispersed never to be reassembled as a hoard of such coinage again,’ prosecutor, Kevin Hegarty QC, said.

During their trial at Worcester Crown Court, Powell, 38, of Newport, and Davies, 51, of Pontypridd, had denied deliberately ignoring the Treasure Act, which demands significant finds be declared. Experts say the coins, which are Saxon and believed to have been hidden by a Viking, provide fresh information about the unification of England and show there was an alliance previously not thought to exist between the kings of Mercia and Wessex. ‘These coins enable us to re-interpret our history at a key moment in the creation of England as a single kingdom,’ according to Gareth Williams, curator of early medieval coins at the British Museum….