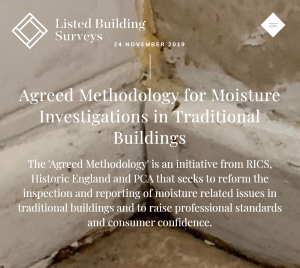 A ‘Methodology for Moisture Investigations in Traditional Buildings ‘ has been agreed between RICS, Historic England and the service provider PCA, a trade body, which should help reform the inspection and reporting of moisture related issues in traditional buildings and raise professional standards and consumer confidence.

‘It was a pleasure working with Duncan and other experts to produce this ground-breaking methodology. For the first time we have an agreement across the heritage bodies, professional institutions and the trade body PCA on the right approach to take where moisture and dampness in buildings I concerned. Its been a long time coming and now all need to do our best to promote it.’

On 21st November 2019, the ‘Agreed Methodology’ was launched at the annual PCA conference in Coventry.

For decades, traditional buildings, many of which are Listed Buildings, have been damaged by irreversible remedial ‘damp-proofing’.   This usually starts at mortgage valuation stage with the valuation report requiring a ‘timber and damp report’.    This is also seen when many surveyors recommend a ‘specialist damp inspection’ as part of a building survey report for a home-buyer.   These simple inspections are often done for free, or very low cost, and will contain a quotation for remedial repairs that might be many thousands of pounds.

In the case of Listed Buildings, it is highly unlikely that Listed Building Consent would be granted for such alterations and unfortunately the work has frequently been seen to have been done without asking first.  Once done, it can’t be reversed.   Holes drilled into historic brick, stone and timbers can’t be taken away.

In response to what has become a cultural practice for many within the industry, the new Agreed Methodology seeks to address these problems.

This Document is currently a working draft. Further amendments are possible before the process of drafting is completed. The organisations that have collaborated to create the text are committed to its publication and use as a guide, standard or measure of competence. Process and procedure for each of the partner organisations must be followed before formal adoption or endorsement.

Until the draft methodology is finalised, agreed and formally adopted by the partner organisations, the text remains an unadopted and unenforceable discussion paper and cannot be used to dictate, measure or benchmark competence or duty of care.

RICS have said: ‘RICS has been working with Historic England and the Property Care Association to create a methodology centred around investigating moisture related issues in buildings. The aim of this initiative is to draw wider awareness to the issues that can occur in traditional buildings if the correct damp inspection principles are not followed, and to raise the bar in the investigation and reporting of moisture related problems in our built environment. RICS supports this initiative and will be consulting with its members and wider industry on a draft methodology that has been produced following a series of discussions between the organisations’.

The aim is to provide a holistic assessment of all moisture within traditional buildings and the possible consequences of that moisture.  It seeks to unify best practice within the entire profession and to ultimately stop mistakes being made, misdiagnosis, buildings unnecessarily damaged and providing consumer confidence of reports that are provided.

Over the next few years we will see an increase in awareness, professional training and changes made to reporting of moisture issues.

We also expect to see the Agreed Methodology formally adopted and instilled into Regulations of the professional bodies so that surveyors and contractors will be held accountable for their advice and actions.

The document can be downloaded from the link below..: