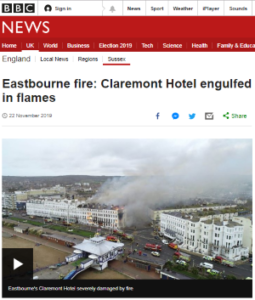 A Victorian seafront hotel has been “engulfed in flames” after a fire broke out in its basement.

Eastbourne’s Grade II* listed Claremont Hotel was evacuated after the blaze started at about 08:50 GMT. The Pier Hotel has also been evacuated.

About 60 firefighters and 12 engines were sent to the scene.

Six people have been treated for minor injuries, with one taken to hospital suffering from breathing difficulties, the ambulance service said.

All those who were in the hotel when the fire started have been accounted for, East Sussex Fire and Rescue Service said.

Nearby residents have been advised to keep windows and doors closed. Roads in the area have been shut.

Flames spread from the basement of the Claremont and could be seen coming out of windows and the roof.

Significant damage
“The building has been seriously damaged and will need to be examined by building experts before a decision is made about its future,” a fire service spokesman said.

He said the fire had been brought under control and the fire service was “scaling back the operation”.

The owners of the hotel, Daish’s Holidays, said the “significant damage” to the hotel was “devastating”.

The company said 130 guests and staff members had been in the building when the fire broke out…..

Simon Palmer, who works at the neighbouring Pier Hotel, said the Claremont was “engulfed in flames” and added the fire had “taken three-quarters of the roof away already”…..

… The seafront will remain closed while structural engineers carry out investigations on the site, a council spokesman said.

The 72-bed hotel forms part of Eastbourne’s Grand Parade on the town’s seafront, close to the pier which was devastated by a fire in 2014.

The building, now comprising the Burlington Hotel and the Claremont Hotel, was constructed between 1851 and 1855 and given a Grade II* listing in 1949.