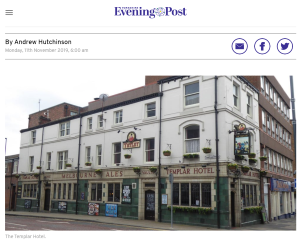 Drinkers at a historic Leeds pub – Templar Hotel on Vicar Lane –celebrated with a drink after it became the latest building in the city to be granted Grade II (GII) listed status, news also celebrated by Leeds Civic Trust.

The Templar Hotel on Vicar Lane has been listed at Grade II by the Department for Digital, Culture, Media and Sport on the advice of Historic England.

It is an early-19 century pub, which was extended in the mid-late 19th century and remodelled in 1928.

The popular pub retains many of its original features including the Leeds trademark Burmantofts tiling on its exterior.

‘The pub has an impressive ceramic-tiled exterior by Burmantofts, a notable Leeds pottery that exported around the world. Despite some later alteration much of its 1920s interior survives, as well as some of the original 19th century features, which show how the pub has evolved over the years.

‘The attached brewhouse at 6 Templar Street also features as part of the listing as it is a rare example of showing the lifecycle of beer from production.’

The status award has been welcomed by Leeds Civic Trust which works to promote improvements of Leeds in the spheres of planning, architecture, heritage and city amenities.

Civic Trust director, Martin Hamilton, said: “The city has lost too many architecturally significant pubs – the Templar is known and loved by many Leeds residents. They will be delighted that the future of this Leeds institution is now assured.”
He added: “We supported the local branch of CAMRA in opposing the granting of a new certificate of immunity from listing. It was a pleasant surprise that Historic England not only supported this but went one step further and listed the building.”