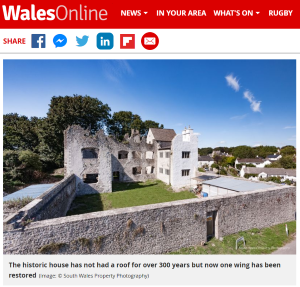 Anton Jones has turned the ruined 500-year old Llantwit Castle – where he played as a child and later bought for £5000 – into a new home worth £1.25 million.

Anton Jones has had a lifelong love and fascination with an ancient building in the Vale of Glamorgan, known locally as Llantwit Castle, since he was spooked by an experience there when he was a child. He remembers: ‘It all started when I was a kid. I used to play here and was absolutely scared to death of it! It was very, very creepy in those days because the ruin was totally covered in ivy. It was always very gloomy even on a summer’s day and there was always an eerie presence here and I actually got chased by horses here once.’

It’s been a lifelong ambition to own and restore at least a section of this unique former medieval home called The Old Castle, even though Anton is regularly haunted by the memory of the horses. He laughs: ‘I can still hear the hooves hitting the stones now when I’m working here!’. It’s taken 15 years to buy the scheduled ancient monument from the Vale of Glamorgan council and five years to totally transform one wing of the medieval house into a dream home; totally by hand. So there have been no cranes, just a rope and a chain. There have been no cement mixers – all the materials have been mixed and constructed using traditional methods. There have been no trips to the builders’ merchants to get modern plaster and pre-cut wood – Anton has used all traditional materials such as lime mortar, and the solid oak beams have been cut and constructed on site.

The huge front door hinges and studs have been forged onsite using traditional blacksmith methods and all the roof and ceiling beams are fitted together with chunky, handmade wooden pegs – all just as it would have been when the house was constructed and then extended more than 500 years ago. It’s no surprise to discover that Anton describes his occupation as a ‘conservation builder’ and that for him there was no option with this property that he loves but to provide the structure with the attention to historical detail it deserves.

But go back five years and maybe Anton might not have saved The Old Castle if he’d known what a struggle it would be. At the time he purchased the ruin for £5,000 and turned up for the first day of work at the most challenging renovation project he could ever imagine, except now it was a reality…

He says: ‘Being a very determined person you can see now what it looks like, but it’s been five years of hell but enjoyable as well – it’s had its lows and highs. It’s a gripe to sell it, I am living here at the moment and I really don’t want to sell it.’ Anton and the local population are not the only people who have been fascinated with the ancient building and its rebirth into a home. Anton says: ‘The TV programme Restoration Man starring George Clarke shot a pilot and they absolutely loved it and wanted to do it in the series but I couldn’t give them the start, middle and end date. They needed it to be a six-month turnover but that was definitely impossible. ‘They were interested because this home is totally unique. I believe it’s the first scheduled monument in Wales to be restored and turned into a dwelling.’