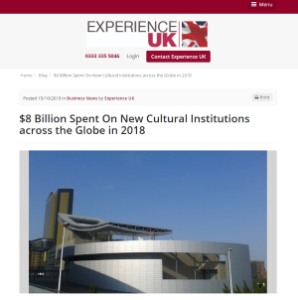 A total of 148 museums and new cultural institutions were constructed across the world in 2018. This was reported in the Third Yearly Cultural Infrastructure Index, a report published by a firm called AEA Consulting.

The report focuses on projects that include museums and other cultural centres. The report also keeps track of new investments in buildings, renovations and expansions. This large sum spent is a decline from the $9.9 Billion spent on 107 cultural projects in 2017. According to researchers, this decline is due to the large amount of money spent on the Louvre Abu Dhabi (approximately $600 Million) in that year. Regardless, researchers claim that an increased amount of dollars will be spent on the building of new cultural institutions in the future.

According to AEA Consulting: ‘We have been looking for indicators that suggest peak cultural infrastructure investment has been reached, but the announced trend line seems remarkably constant over the past three years and the number of completed projects has increased each year over the same period’. The report finds that the median budget for ‘announced projects’ has risen to $38 Million as compared to the $36.8 Million in 2017. At the same time, the median budget for ‘completed projects’ fell to $34.5 Million from $36.1 Million in 2017.

Another interesting finding from the report is that the top three most expensive new cultural institutions in 2018 were all in China. The world’s most expensive announced project of 2018, the Valley XL in Beijing is also in China and will cost a massive $2.8 Billion. Additionally, the report finds that New Zealand and Australia have shown an increased interest in new cultural institutions. The total amount of money poured into the two countries has risen to $1.3 billion from $325 million in 2017. Between the two countries, eight projects were completed and 15 were announced. An important finding from the report is that museums remain popular and continue to account for over half of the total number of new cultural institutions.