IHBC’s ‘Heritage from the doorstep’: Anger as thieves cause £50k worth of damage to Yorkshire GII listed church 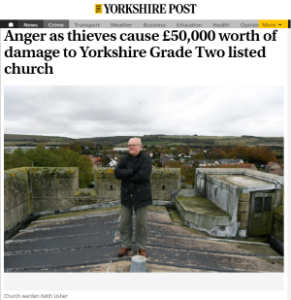 It is the focal point of a North Yorkshire community – writes The Yorkshire Post – and has seen generations of families baptised and married over the years, but Sherburn residents were left devastated when the Grade II (GII) listed Church of St Hilda was stripped of lead, resulting in £50,000 worth of damage.

Police have described the theft, which took place at the Grade Two listed building sometime between October 5 and 7, as appalling and selfish. The damage was discovered by church warden Keith Usher when he went to test out the heating for the winter. ‘To my disbelief I went into the vestry and was confronted with water coming down the wall and water all over the floor,’ Mr Usher said. ‘Initially I thought the guttering must have fallen of or was blocked, but I went outside into the church yard to find that there was lots of holes in the glass and also when I saw the gutter was still up I thought someone must have been and stolen the lead, which is what happened. There were two other areas in the church that were also flooded as a result of them removing the lead.’

Mr Usher said he was shocked by the sights that greeted him. ‘I felt annoyed to say the least,’ he said.  ‘I just couldn’t believe that someone could do this with a church. I just think they have got nothing of interest but gain on their behalf but that is nothing compared to what it is going to cost to put the roofing back together again.’ Architects are currently obtaining quotes to fix the roof, but because the lead has been removed in three areas, Mr Usher estimates it is going to cost at least £50,000 to fix.

The history of the Church of St Hilda stretches back to the Norman times with its tower and nave. There are also some fragments of Saxon sculpture and medieval glass. The church was extensively restored in the last century and the completion of the work was celebrated by the erection of a memorial cross in the village.  Mr Usher said the church had received some money from donors to help cover some of the repair cost, but that savings will also have to be used. He also explained the theft had left a lasting impact on the Sherburn community. ‘People are just flabbergasted and cannot believe someone could be so cruel to do such a thing,’ he said.  ‘A church is important to the local community in many respects, especially for baptisms and weddings and other occasions like Harvest Festival, Christmas and Easter, It is used by the school for some services as well.  It’s appalling what has happened. Whoever they are must have a revenue to get rid of it, otherwise there is no purpose to them stealing the lead. Fortunately, as soon as we discovered the damage, we had three members of the community who went and put some sheeting up and some boards to actually secure the roof so it kept the rain out. We also had to get a dehumidifier in to dry the church out.’

North Yorkshire Police is investigating the lead theft. A force spokesman said: ‘This appalling theft has caused damage to a precious and historic building that has stood at the heart of the local community for hundreds of years. The actions of whoever did this are as selfish as they are disgraceful. We are investigating the theft, and would urge anyone in Sherburn or the surrounding area who saw any suspicious activity to get in touch.’

The theft comes as The Yorkshire Post reveals the county’s churches are bearing the brunt of thousands of crimes every year with lead thefts, criminal damage and violence the most common offences.  Since the start of 2017, North Yorkshire Police has recorded 205 crimes against churches including 17 cases of lead theft, 99 general thefts, 73 criminal damage and reports and 16 violent offences.